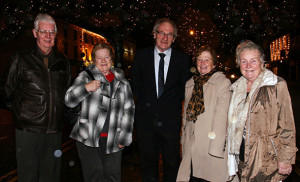 Castleisland’s string of sparkling Christmas lights – which adorn the trees on the main street – have been admired by many local and visitor since they were first switched on by then MEP, Gerry Collins in 1997.

The lights were secured and fitted then under the steam of a Leader grant.  They have been maintained all down through the years by the local tidy towns committee through its often meagre budget and the kindness of the ESB bill paying business community.

This year, feeling that the lights were well due for a revamp, the committee thought of the tried and trusted route of the church gate collection.

To try and secure a date in the coveted and packed calendar there was proving a sticking point until Cllr. Michael Gleeson learned of the committee’s plight.

Cllr. Gleeson, in an unsolicited gesture, stood down his collection dates locally and handed the opportunity to the appreciative committee.

The collection was taken up on the weekend of October 26th  / 27th and the donations gathered and the refurbishment of the lighting went ahead in time for the pre-season switch on.

As a token of their gratitude the committee members asked Cllr. Gleeson to visit Castleisland before Christmas to inspect just how his gift to the town actually panned out.

The weather played a spoil-sport on the evening of his visit and photographs had to be grabbed between gusts of high wind and driving rain. Cllr. Gleeson got the point however and the committee urged me to include their words of sincere thanks to him and to those who contributed to the collection here this week.