Another Kerry woman has been called up to the Irish Women’s Rugby Squad. Castleisland native, Sharon Lynch has joined Currow’s Siobhan Fleming as the squad commenced its preparations for this year’s RBS Women’s Six Championship with a training camp last weekend.

Sharon, a daughter of Ellen and Tom Lynch, took up Rugby only six years ago after moving to Dublin to work as a senior property manager with Savill’s Ireland.  There she plays her Rugby with Old Belvedere. More recently she has been chosen on the Leinster team and was delighted to play on the hallowed turf of Thomond Park recently.

“I’m delighted and thrilled to get the call-up to the Irish squad of course – but I have an awful long way to go now to get on the team and on the field of play,” said Sharon on Tuesday evening as she began to come to terms with the honour.

The celebrated Ireland Women’s head coach Philip Doyle has had some tough decisions to make in selecting the 34-player extended squad for this year’s campaign..

Sharon’s is one of a  number of new faces coming into the squad this year and this, coupled with seasoned internationals and exciting younger players coming through, will certainly make training particularly competitive.

“Following on from the campaign last year which was our best to date, it is hard to be anything but excited for the season ahead.

“There is a lot of hard work and training ahead of us but I am confident in the ability of the players to deliver on the field this year,” said the ccoach.

Best wishes to Sharon in training and in her quest for international field time over the coming season.

She has a great sporting pedigree going back to her grand-father, Jim Barry in Rugby and her uncle Denis ‘Pele’ Barry is Soccer and her dad Tom ‘Rodney’ Lynch played minor football in goals for Kerry. So it wasn’t off the street she got it. The following is the squad now in training for the season ahead: 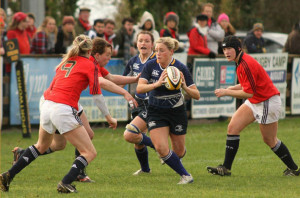