THEN: Ahern’s Garage on Castleisland’s Limerick Road was put on the market in September 2005 as the business prepared for its mid-winter move to its new base on the Tralee Road. Main Photograph: John Reidy 07/09/2005 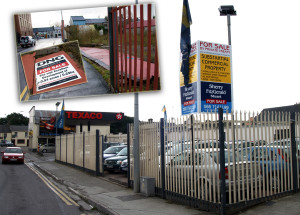 NOW:  The site was sold and is now firmly in the clutches of the state of abandonment which grips many of its equals around the country.

It has also come to the attention of visiting Tidy Towns adjudicators over the past few years.

Last week’s storms did the devil with the temporary, timber hoardings on the road side of the site. There were talks recently that the area could be used at a car-park. This was as much to put an appearance on the dereliction of the half-acre site as much as anything else – and it would be a huge, visual improvement.

Though the Limerick Road is no longer the main artery it was during the years leading up to the opening of the bypass, the appearance of this carcass of the good times will do untold damage if it is left to disintegrate further.

The hoarding carried a sign for auctioneers WH Giles and this too lies flattened after the storms. I’m just wondering aloud: Whose responsibility is it to keep this site and those like it in a state of acceptable repair ?