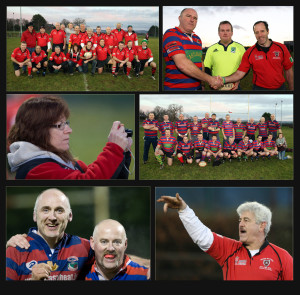 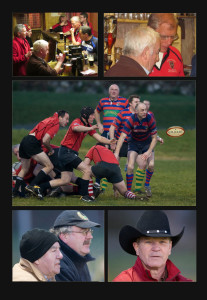 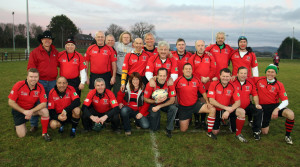 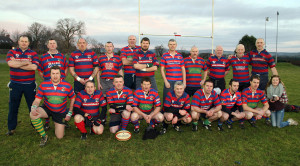 They’ve no more than touched back down on US soil and already they’re talking about a return visit.

Members of the Munster Rugby supporting New Jersey based Morris Rugby Club spent a long weekend here in Castleisland at the end of last month and to say that they ‘clicked’ with the locals is an understatement.

They came, they saw and they conquered any cultural divides there may be between us on both sides of the broad Atlantic.

They got a master-class in filling pints of stout at Sheila Prendiville’s by auxiliary bar-man David D. Prendiville; they played a no-holds-barred game of Rugby at the famed Crageens. Reputations were enhanced and re-established and definitions of ‘An International Try’ ‘Overseas Scores’ were teased out with the notion of adding them to those re-blooming reputations. The visitors were treated royally at the Castleisland RFC clubhouse afterwards.

An advance party of seven or eight members of the club ventured here last year under the guidance of Seamus Brosnan. Seamus and his dad, Denis led them off up town and astray during the trip and they loved every minute of it.

While only one of them caught the pint-filling class at Sheila’s last year, there was a queue up for it this year.

“After last year’s small trip it was sort of joked about if we doubled our numbers we could actually play a game in Ireland.  Word got out on the success of the trip and before we knew 30 people has signed up for the 2014 trip. Most of the people are from Morris Rugby club in NJ but we also had people from NY, Connecticut, Kentucky, and Texas.  Some of them travelled the world watching rugby but for many of them it was their first trip to Ireland – and they’ll be back,” said Seamus

“There are talks in place already about a possible return trip to Castleisland next year but I’m not sure how we could top this year’s visit.  Morris Rugby Club members are also hoping for a possible visit by Castleisland to NJ/NY.”

Seamus Brosnan provided the following account of the logistics of the trip and the people who made it possible and of the impression the tourists went home with.

We had to work closely with MRSC (Munster Rugby Supporters Club) who helped arrange stand tickets for the game as well as a corporate box.

Brosnan tours provided the bus including a stop off on Friday morning at the Cliffs of Moher and Bunratty Castle.  There were technical problems with the bus at Bunratty but the tourists were quite content on spending an extra hour in Durty Nelly’s!

Denis and Catherine Brosnan hosted the group with some traditional Irish Stew, Smoked Salmon, and there were rumours that some of the local hard stuff was drank.

The night continued with a few pints in the Poets Inn and Browne’s followed by the finale in Sheila’s where a feast of music and song provided by Jackie Dan Jerry O’Connor and Terence McQuinn where both traditional and American music was enjoyed.

Tourist Impression: It’s like stepping back in a time.

The tourists enjoyed a quite morning visiting local shops and eateries. In particular they liked the River Walk and were fascinated by some local history including the placement of severed heads of local rebels on JKs Market House, and the burning of the Kingdom House and Carnegie Hall by the Black and Tans.

Thanks to planning by Billy Horgan and Dan Casey Castleisland but out a strong team of experienced 40 somethings against the visiting team who had members in their 60s!.  The game was played in 3 periods of 20 minutes with the locals getting a number of quick tries in the first period, 2 scored by local giant Dan Casey.  The Americans got going in the second period and got the only try of the second period where father and son team Tom and Kris O’Brien originally from Tipperary put a play together where the father Tom scored for the tourists.  The third period had a moment of fun where the then linesman Dan Casey stepped on the field and tackled fellow Castleisland man Bill Horgan as he was on his way to score a try.  The referee summed up the game when he said it was a fun social occasion but nobody held back, the locals won but the tourists put up a good show, much better than what was expected despite their smaller size and larger ages.

The game was followed by a session in the clubhouse that was kicked off with a nice exchange of items from Castleisland Rugby club and Munster Rugby USA/Morris Rugby. Castleisland local Seamus Brosnan who led the tourists to Castleisland was particularly pleased when he was presented with a Castleisland Rugby club geansai and pennant.  Mike McElligot got the night off to a good start with a few songs followed by Denis Brosnan with An Poc Ar Buile.  The American rugby players were in awe of the great club house/facilities that Castleisland have and were in even more awe by the hospitality that was laid out for them with a night of food, drink, music, and song, with further exchanges of rugby shirts and t-shirts as the night wore on.  The night ended with a few more pints in Fagans.

Brosnan’s Tour bus was back in action to take the tired and weary travellers to Limerick on Sunday morning where they went to Thomond Park.  They were greeted by the organising committee of MRSC at the MRSC bar before the game.  Some of the tourists took part in the Guard of Honour on the field before the game.  Some more of the visiting members got to meet Dougie Howlett.  At half-time Seamus Brosnan gave an on pitch interview on MRSC USA Branch and gave a shout out to Castleisland RFC.  The tourists were amazed at how in to the game the crowd were, the singing during the game, the quietness of the crowd especially for the away kickers, and the players lap of honour after the game.  A few more visits to local hostelries was completed before they got up early Monday morning to return to the US of A in hopes of some day having a Castleisland like rugby clubhouse.

A quote from visitor Andy Steinberg summed up the visit. “I’ve travelled the world playing rugby.  The New Zealanders are the best rugby players but the Irish are the best people”.

Dauber and Steve Falatyn deep in conversation in Sheila’s on the eve of the game.

Steve in action at scrum-half as he gets his line moving.

Dauber and Willie Leane keeping a close eye on the game.

Texan and Morris Rugby Corporation supporter, Bryant Winn pacing the side-line during his team’s game against a Castleisland selection at The Crageens.

Morris Rugby Corporation team supporter, Sheryl Turse grabbing footage of  their game against a Castleisland selection at The Crageens.

The Morris team’s Andy Steinberg putting order on his team during the game.