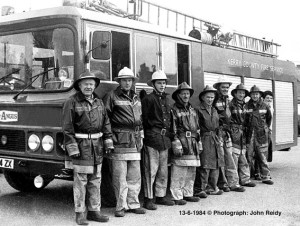 One from the Files:

Members of Castleisland Fire Brigade pictured after dealing with a suspected gas leak in the old railway yard.

The gas-like smell surfaced in the area of the railway yard from time to time and could be quite strong and many people found it sickening.

It was thought that it came from what were known as ‘Tar Barrels’ which were stored there by Browne’s at that time.