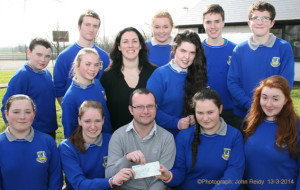 With the on-going support of the principal and the Kerry Education and Training Board the Castleisland Community College Students’ Council is very active in the day-to-day affairs of the school community.

A wrist-band campaign entitled ‘Don’t Crack-Up –Talk-Up’ was very successful in its aim of promoting positive mental health in the school.

As a result of the campaign the students were delighted to be in a position to present a €150 donation to ‘JigSsaw Kerry’ last week.

Two leaving certificate students from the college, Lisa Browne and Máire O’Connell travelled to Dublin last year for training with the ‘O2 Think Big’ project. The wrist-band project was based on the hints and tips the students picked up during their trip to Dublin.

The event created a great atmosphere in the school as well as promoting positive mental health.

Aidan Murphy of JigSaw Kerry visited the school to collect the cheque. Mr. Murphy expressed his sincere gratitude to the students and teachers for their interest in youth mental health and the donation.

Jigsaw Kerry is an initiative which is part of a national network of Jigsaw projects supported by Headstrong, the National Centre for Youth Mental Health. Jigsaw Kerry will be initially concentrating its resources on the Tralee area.

The initiative aims to bring together community support for the mental health needs of young people aged between 12 and 25.

During his visit to the community college here Aidan Murphy told the students that Jigsaw Kerry would be expanding its services to the Castleisland area over the coming weeks.

Do you Recoil at Christmas Light Re-Coiling

If you are one of the many who recoil at the thought of re-coiling Christmas lights then, recoil no more and, yet, re-coil away. A young man with the expanding mind of an inventor is about to take the task in hand and eliminate the kinks, the knots and the annual trauma from the taking out and putting back of  the decorative, twinkling  jewels of the festive season.

And, as Nancy Griffith song told us ‘There are Lights beyond these Woods, Mary Margaret, – and I suspect that Christian Steinborn heard that song too.

For it is he and his idea which won the County Enterprise Award and the teachers at Castleisland Community College are delighted to call him “one of our students.”

He was the deserving winner of the senior category in the final of the awards in Tralee recently. He will now go on to compete in the finals which will be held in Croke Park next month.

Christian, a transition year student at the college, created a new product as part of his TY business project. His invention is intended to prevent the tangling of Christmas tree lights while also “making the job of putting up and taking down lights a breeze,” according to the young inventor.

Tired of untangling Christmas lights and the breakages and the shorts than comes with it, Christian decided to take things into his own hands and design something to solve the problem of storing the lights in a manner which would prevent these perennial problems.

So he created the Easy Coil, a lightweight, durable system of storing lights that is simple yet effective. Christian also created two other versions of the product, one to hold electric fencing wire and one for general purpose.

In December Christian entered the Junior Dragons Den where he succeeded in qualifying for the National Finals and an opportunity to appear on Dragons Den. Christian hopes to be one of the lucky few who will be contacted to appear on the televised programme.

Fifth year Enterprise Students at Castleisland Community College decided to focus their attention on Mental Wellness by organising a campaign inspired by the late Donal Walsh.

The students and their teacher, Noreen Barrett -Kissane used the Take Five …for your mental health promoted by Headstrong.

Students and staff got an opportunity to reflect on good practice in creating wellness by focusing on the take five recommendations:  CONNECT, GET ACTIVE, NOTICE, GET INVOLVED and GIVE. Wrist bands #LIVELIFE were worn as an outward sign of their commitment to living life healthily and more purposefully.

Proceeds of the campaign will go to the Donal Walsh foundation. This campaign was preceded by a Walk In My Shoes initiative last Autumn. This reflected on the importance of Mental Wellness in the pastoral care programme in the school.