It won’t be too long now until electioneering, poster erecting fever grips the nation and every pole in every parish.

But did you know that there’s a very firm leash being kept on the enthusiasm of the postering teams and a raft of legislation – with at least eight different headings – under which they can fall foul of the law.

While plastic ties are all the go now there are many poles hereabouts carrying the scars of years of felt-nail driving, party devotees.

The availability of spray-paint and a proliferation of disgustingly poor ‘graffiti art’ made life hard for many postering teams in some of the more recent elections.

This has made the road-side, grass margin placed posters sitting ducks and left the old fashioned ESB / Telegraph Pole a poll topper with posterers.

There are instances of poor quality graffiti resurfacing in recent times. The tunnel at Doolague is a prime example and leaves one to wonder if all the gifted are gone off to foreign shores. It’s an offence of course but a well-placed spray / stroke of genius does tend to force a fulsome admiration. There are those who spray-paint over road signs and, without the wit, it’s just vandalism and an even greater offence. 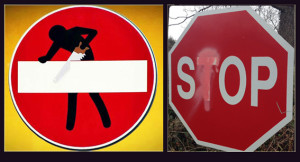 I get pictures of such handy-work occasionally and, mostly,  they differ greatly from a collection of street signs I saw a few years ago – where a mere flip of imagination created a work of graffiti art.

The pictures here show an example of the good and the pitiful. The good is European and the other is local. Wouldn’t you be nearly ashamed to show that to anyone.

Do send us a photograph if you see anything along these lines in your neck of the woods. And there’s the basis of a design / redesign competition there.