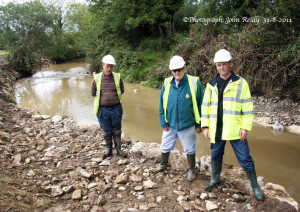 Dr. Martin O’Grady of the Central Fisheries Board (centre) with staff members, Seamus Faulds (left) and Mike Daly pictured during work on the Shanowen River at Tullig in August 2011. The Shanowen is a tributary of The Maine and they meet just beside The Crageens Bridge. ©Photograph: John Reidy 31-8-2011

A report in this morning’s Irish Examiner makes sobering reading for environmentalists and those concerned with the quality of water in our rivers.

The report, by Donal Hickey, reveals that experts are finding it difficult to trace sources of pollution close to the spring of the River Maine at Tubbermaing here in Castleisland.

“Water quality in the River Maine, downstream of Castleisland, is of “unacceptable status’’ as far as water framework directive standards are concerned, according to Kerry County Council.

Executive chemist David Lenihan said the limestone nature of the area made it extremely difficult to trace the pollution sources. He said the river, which is not used as a drinking water source, is monitored monthly at four locations and results from all four showed the water to be “less than good quality”, particularly for nutrients and ammonia.

He also told a meeting of area county councillors an EPA survey, in August 2013, showed deterioration in biological quality since a previous survey, in 2011.

Mr Lenihan said he could not be sure if the spread of agricultural slurry was a factor, but heavy rainfall exacerbated the situation.

The worst affected site is at Tobermaing, source of the Maine, he said.

Cllr Michael Gleeson, who raised the issue, said the Maine was a leading angling river that should be restored it to its former pristine condition.

“Every effort must be made to trace the sources of this unacceptably high level of pollution,’’ he urged.

Mr Lenihan told the meeting the pollution could impact on mayfly and stonefly usually found in salmon rivers.

Cllr Danny Healy-Rae felt the provision of a long-waited extension to Castleisland sewerage scheme would help the situation, adding there were problems with septic tanks in the entire area.

Meanwhile, results of water quality tests in Lough Guitane, source of drinking water for much of Kerry, show a satisfactory unpolluted, or low nutrient, status,” according to Mr. Hickey’s report.

Locals have been voicing concerns in Castleisland from time to time in recent years about a ‘colouring’ in the water of the Maine. These observations come from the town stretch as its banks here have been developed into a pleasant, riverside walk.

Some of the colouring could have been explained away in past couple of years by the work of the Inland Fisheries. They did a major and welcome refurbishment job on the river which facilitated the travelling of salmon to the upper reaches at spawning times.

However, more recent reports, now take on a more sinister tone and leaves such an important and long designated salmonoid river in a very vulnerable state. The very fact that the source of the pollution is proving difficult for the experts to find simply underlines how challenging our hugely mysterious underground river system really is.