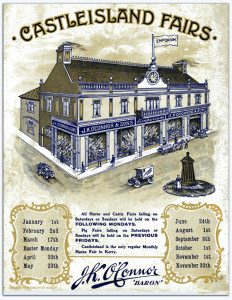 A palpable sense of loss swept through the town and valley on Thursday morning as its commercial flagship, The Market House had lowered its colours for the final time. The line ‘The Market House is Closed’ was on the bush telegraph that morning and on the lips of everyone engaged in conversation on the street.

Its unique skyline and ‘across-the-street’ imposing stance will remain even if its commercial heart stops ticking.

Say you were to portray your vision of Castleisland with a single building. Its character, its ‘Here I am – I belong Here’ sense of presence would leave you with little option.  Look at the mast-head on The Maine Valley Post.

A source close to the O’Mahony family said that the tough trading conditions of the retail  business today has taken many landmark drapery houses in its sweep and this is another statistic.

Though they think it unlikely that it will reopen as a drapery business again they also said that they wouldn’t like to try to predict what will happen to the deeply historic building now.

The Market House has been part of Castleisland and its psyche since it was built and opened here in 1747. There is the kind of genuine sadness associated with the closure that’s normally reserved for the passing of a friend or a colleague.

It came into being as part of an agreement between six landlords who hoped to put the commercial life of the area on a sound footing. It did for a while until the inevitable split and ultimate ruination of the building in the early 1800s. But it bounced back soon after and not for the last time either.

Taken in the context of its long and chequered history this is another phase in the life of one of Kerry’s truly historic, landmark buildings.

Local legend tells us that the heads of three executed prisoners were spiked on the gates of The Market House at around the time of the butter market and well before the era of health and safety kicked in.

The clock on The Market House and the nearby fountain supplied the people of the town with the basic needs of water and the time of day for generations.

Two fairly compelling pieces of documentary evidence show that the clock was placed there in 1914.

The first, a photograph taken in that year, came to light when Moynihan’s shop and house across the road was being cleared out.

The picture clearly shows the house minus its landmark clock. Then, an artist’s impression from later on that same year shows the building with the clock sitting proudly on top.

To fully appreciate the history of the building itself it is necessary to look back to the writings of TM Donovan which he included in his book ‘A Popular History of East Kerry’ which was first published in 1931.

However, before he published the book, he serialised much of its eventual contents in weekly columns in The Kerryman in 1929. He pitched these posts as portraying the events of the town from 60 years before. He actually started many of these columns with the line: Sixty years ago – as indeed he did with the Market House piece:

“Sixty years ago The Market House now the The Emporium, a finely decorated shop equal to any in the City of Dublin, had three institutions housed within its great walls. The central portion was the market proper, where farm produce of all kinds was weighed, bought and sold. Three huge gates fronted the Main Street. Many old Castleislanders will remember Mr. John Burke’s brown retriever  that guarded those gates  at night and sent his loud bark reverberating through the town.

Some used to say that the dog was barking at the headless coach which old Patsy Lawlor averred was often seen passing through the town at the dead of night. The melancholy howl of John Burke’s retriever and that same headless coach prevented many young fellows from staying out too late at night. It was as effective as the Black and Tan curfew of later years.

In those days the markets were held on Tuesdays and, in the height of summer, the inside and the outside as far as The Fountain were occupied by firkins of butter with their golden tops exposed but protected from the dust by green cabbage leaves.

Before the advent of the railway train from Gortatle, in the early seventies, the butter was dispatched to Tralee by car and to Cork by train via Farranfore.

Earlier than that, it was carried by car and sleds all the way to Cork by road. The sleds and sometimes the horse were sold in the city and the carriers came home in a Bianconi Car.

On the left, as you entered The Market House, was the local dispensary where Dr. Nolan and his assistant dispenser, Mr. Thomas Burke tended to the wants of the sick poor. On the right, where Mr. MJ O’Connor now has his store, was the Court of Petty Sessions where people who indulged too freely in the then ‘two-penny half-ones’ had to appear before the magistrate.

I saw the first telegraph poles being put up in Castleisland in 1871 and the arrival of the first train a few years later.

As a matter of historical interest I might mention that the first passenger to arrive by train was the late Mr. J.K. O’Connor, who so ably represented East Kerry in the County Council for many years. He happened to be in Dublin when our next little engine, that had a first class compartment attached to the tender, was dispatched to Kerry. After the advent of the railway train to Castleisland, the town threw off the swaddling clothes of a village and commenced to grow upwards and outwards rapidly and with great vigour.”

That was then. Where are we now in 2014?  It’s a question we’ll have to ask collectively as a once proud, commercially viable town.

I know it because people are now looking over their shoulders and asking what’s next or who’s next.

I know it because a man told me to look at the 29 shops and businesses closed on Main Street over the past few years.  Another of our great and historic landmarks, The Crown Hotel is locked up since last Easter.

I know it because the town as we know and love it is dying as we look on and its state of dwindling commercial activity is a talking point here.

And I know it because people here are saying and thinking that if it happened anywhere else, you’d care to name, there would be calls for a task force to be set up and questions would be asked and answers expected.  When was the last time any of our political representatives made any meaningful announcement with regard to the future of the area.

The politics of austerity is taking a heavy toll on Castleisland. Its history suggests that it will fight back. The pages of its story are full of pride and rebellion and of getting off the floor when the odds were against it.

The present and long drawn-out economic climate is presenting Castleisland with one of its greatest challenges yet.

In the run-up to the general election in 2016 the people here will be listening for a voice of hope. Where will that voice come from and what message will it bring? Action will have to be taken for the town to survive as a commercial entity. A continuation of the present situation is not an option.