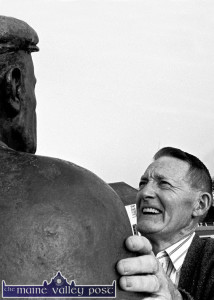 As an advisor and supporter of the fledgling Patrick O’Keeffe Traditional Music Festival there was none more ‘out there’ than the late Johnny O’Leary.

When the hugely inexperienced committee of: Mary Jones, Mike Kenny and myself sat down to talk on the first few occasions we compiled a list of possible, festival friends.

Johnny O’Leary and Denis McMahon were on top of that list with Peter Browne – who suggested the idea of the festival in the first instance.

Time proved that they were worthy friends and allies as festival time sped towards us in the autumn of 1993.

Both Johnny and Denis were regular callers to Charlie Horan’s Bar on Main Street – which was under the management of Mary Jones at that time.

The depth and volume of time-proven advice and help they provided, no doubt, put that committee well on its voyage of discovery on the long and winding road.

There were many more over the years, of course, but they were the first to put their considerable shoulders to the wheel when it was needed most.

Ten years after his passing, Johnny O’Leary will be remembered at this year’s 21st annual Patrick O’Keeffe Traditional Music Festival from October 24th to 27th.

*Terry Moylan will launch a book on Johnny’s life and music and a special Sliabh Luachra concert on the Sunday night will be furnished by some of the finest exponents of the music around today.

Here’s the projected line-up of musicians invited by the O’Leary family and Paudie O’Connor.

Piper and RTÉ broadcaster, Peter Browne will MC the Johnny O’Leary Memorial Concert at the River Island Hotel. It will start at 8pm sharp on Sunday night October 26th.

There is a huge list of other events which have made the festival what it is since 1993. This includes: the Pub Trail throughout the town over the weekend and the Saturday afternoon singing session at Hartnett’s Bar. There are book and CD launches and the omni-present, impromptu sessions that are just about within range of imagination but away out beyond the reach of prediction.

*Terry Moylan posted the following piece on Johnny O’Leary some time ago and it gives us a great insight into the man behind the accordion and the smile.

“Johnny O’Leary was born in 1924 in Maulykeavane which is about half-way between Killarney and Ballydesmond, in the centre of Slíabh Luachra. He lived in the area all his life, and spent his whole life learning and playing the local music.

It is an area that has surely produced more musicians for its size and population than any other part of Ireland. Johnny played with them all, learning tunes and passing on tunes and creating with his fellow musicians an unequalled tradition of music-making.

He started picking out tunes on the melodeon at the age of five and by his early teens he was regularly playing for local dances.

By the time he was 15 he had struck up a musical partnership with Denis Murphy that was to last a remarkable 37 years, ending only with Denis’s death.

In 1964 Johnny and Denis accepted an invitation to play in Dan O’Connell’s newly opened pub in Knocknagree, and Johnny played for the sets there, every Friday and Sunday night until his illness and death in 2004.

The great scholar of Irish traditional music Breandán Breathnach, had for many years been visiting Slíabh Luachra and collecting music from Johnny.

He intended to publish this material because he regarded Johnny’s playing as preserving the style and repertoire of the area and of its famous musicians Padraig O’Keeffe, Denis Murphy and Julia Clifford, Tom Billy Murphy, Din Tarrant & Thadelo Sullivan to name only a few.

Breandán’s project was taken over by Terry Moylan after his death in 1985 and was brought to completion in July 1994 when a collection of 348 of Johnny’s tunes was published by the Lilliput Press in Dublin.

Johnny O’Leary’s reels, jigs and hornpipes are generally part of the broader national store of music, but his polkas, slides and barn-dances are often quite unusual and little known. Also, with his style of playing be was able to invest such apparently simple forms with considerable complexity.

They always sounded far more interesting in his hands than in the hands of others.

The Slíabh Luachra musicians seem to be able to get more out of these tunes than musicians from outside that tradition. He could also inject an infectious energy into the music without a crude resort to excessive speed.

He was always regarded by discerning dancers as a joy to dance and listen to.”

*Terry Moylan is a researcher and archivist with Na Píobairí Uilleann. He is the author of The Age of Revolution in the Irish Song Tradition 1776-1815.