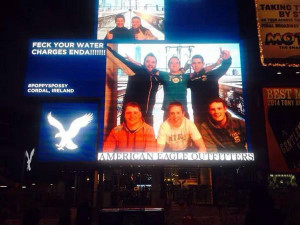 Some 105 years after the infamous stand by natives against ‘Dick Johnny’s Eviction’ – a new generation of the Brave Boys of Cordal have struck a blow against the tyranny of imposed water charges – in New York if you don’t mind.

A Brian O’Malley sent the picture to the Irish news website joe.ie showing him and his friends making fine use of a feature owned by clothing store American Eagle.

“If you buy something in their Times Square store you are also get to pose for a picture that will appear, albeit briefly, on a massive screen in Times Square.

Crucially, you also get to post a message, and the lads might be a long way away, but they are still tuned in to the big news back home,” according to joe.ie

As we turn the final straight into this year’s Patrick O’Keeffe Traditional Music Festival and our thoughts turn to singing, I’m presented with the perfect opportunity to fulfill a promise to print Eugie O’Mara’s great song about the attempted eviction in 1909 and to salute the spirit of the new generation of ‘Brave Boys’ and their blow for democracy and fairness.

Ye brave Boys of Cordal who made a brave stand,

ye worked night and day to keep Walsh on his land.

Ye stood in the gap before baliffs and police,

and ye drove them away like a pack of wild geese.

Police came from Kerry, from Cork and from Clare.

from Caherciveen and a place called Kenmare.

From Killorglin and Dingle, Tralee, Gortalea,

Limerick, Newcastle and around Abbeyfeale.

When they got to Kilmurry they were srtuck with surprise,

When they saw there before them the tough Cordal boys.

The county cried halt to the cops in the grove,

Seeing the road blocked with trees which no peeler could move.

The Battering Ram, boys, had no room to pass,

With the large crowd of people who stood ‘round the cross.

The Peelers insisted we’d all go to jail,

It was Simon and Florry who gave us light bail.

They went through Miss Kate’s place and Down through the green,

Their photos were taken coming down through the lawn,

Without shirts but old mufflers they bought in the pawn.

Fifty defenders in handcuffs were bound,

Coupled together they marched into town.

I’ll never forget that day ‘round The Green,

when they showed them the way up Tom Craig’s bohereen.

And now to conclude, boys, I’ll finish my song,

Hoping Walsh is reinstated and that before long,

I am no baliff in England’s employ,

Nor a poet of great learning – but a labouring boy.