Put it there brother ! Seán Brosnan (left) is congratulated on his early second-half, equalising goal by his brother Pierse as Danny Feehan turns away after doing likewise during the Keane’s Jewellers Champions Trophy game against Cork side Park United in Castleisland on Sunday afternoon. ©Photograph: John Reidy

Castleisland’s Seán Brosnan on the attack while being shadowed by Park United defender, Ger O’Neill during the Keane’s Jewellers Champions Trophy game in Castleisland on Sunday afternoon. ©Photograph: John Reidy

Park United defender, Laurence O’Flynn is under pressure from the attacking Mike Hanifin for Castleisland with United player, Ger O’Neill in support of his team-mate during the Keane’s Jewellers Champions Trophy game in Castleisland on Sunday afternoon. ©Photograph: John Reidy

Mike Hanifin about to get in a header in this situation with Park United defender, Dave Dineen during the Keane’s Jewellers Champions Trophy game in Castleisland on Sunday afternoon. ©Photograph: John Reidy 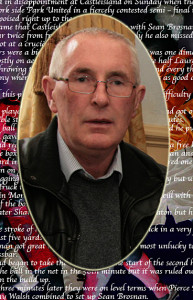 Castleisland’s aspirations of reaching the Keane Jeweller’s Champions Trophy final ended in disappointment at Castleisland on Sunday when they went down to Cork side Park United in a fiercely contested semi – final that was delicately poised right up to the very end.

It was a game that Castleisland could have won with Sean Brosnan hitting the crossbar twice from free kicks and unfortunately he also missed from the penalty spot at a crucial stage of the game.

The visitors were a big physical side whose game plan was one dimensional relying mostly on aerial bombardment with their centre half Laurence O’Flynn throwing the ball further that Rory De Lap and every throw in he got from any where in Castleisland’s half of the pitch was as good as a free kick.

They used this ploy to great effect and Castleisland had difficulty coping with it.

In a game played in heavy underfoot conditions Castleisland got off to the worst possible start by conceding a goal after just three minutes.

A through ball from midfield found Colin Stack in space and he put in Shane Cahill and gave Kevin Moran no chance from close range.

Castleisland regained their composure quickly and they got a free kick on the verge of the box after Winston Barry took down Sean Brosnan and he earned a yellow card in the process and it could easily have been a red one as Brosnan was clear in on goals.

After shrugging himself off Brosnan hit the free kick sweetly but unfortunately it struck the top of the crossbar and went over.

Then Kevin Moran had to be at his best to deny Ger O’Neill with a shot from the verge of the box.

Minutes later Shane Fox created a chance for Shane Beaton but he flashed his shot wide.

Just on the stroke of halftime Castleisland got a free kick in a very promising position just five yards outside the box.

Sean Brosnan got great dip in his shot and he was most unlucky to see it come off the crossbar.

Castleisland began to take the initiative at the start of the second half and they had the ball in the net in the 58th minute but it was ruled out for a handball in the build up.

However, three minutes later they were on level terms when Pierce Brosnan and Timmy Walsh combined to set up Sean Brosnan.

He slipped the ball under the out coming Park United keeper and a defender trying to clear his lines put it into his own net.

Now Castleisland looked the more likely to win the game and they went close to going ahead in the 63rd minute but Piece Brosnan’s was denied by a great save by the Park United goalie, Ian Fitzgibbon.

Four minutes later they had a wonderful chance to go ahead when Pierce Brosnan was taken down inside the box and referee Derek O’Shea had no hesitation in pointing to the spot.

Sean Brosnan’s spot kick lacked precision and was pushed away by the Park United keeper right back in his path but he skied his second attempt.

As the half progressed it looked like it would take extra time to decide the game but this all changed in the 82nd minute when the visitors struck for what proved to be the winner.

It began with a long throw from Laurence O’Flynn which the Castleisland defence found difficult to contend with and when two defenders failed to clear their lines, Colin Stack was at hand and he drilled the ball through a forest of players to the back of the net.

The clock was against Castleisland now but they battled hard to try and engineer an equaliser but never looked like getting it as the visitors slowed down the game and wound down the clock.

Despite going down Castleisland can feel very proud of their performance against a very good Cork side and on another day if their luck was in it could have been a different outcome.