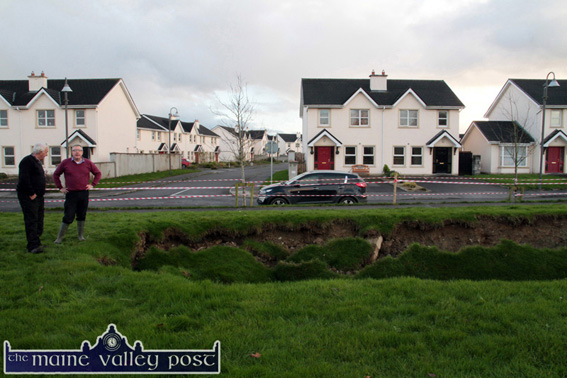 The following is a statement from Kerry County Council which updates the situation at Cahereen Heights as of this evening.

Following the events of the weekend, it has been identified that there are further underground storm water tanks situated in the green area of the estate. These tanks have been securely fenced off from public access by Kerry County Council as a precautionary measure, as has the area of ground collapse.

The estate is a private estate, not in the charge of Kerry County Council. The Council has been in substantive negotiations with the site developers Coolfadda Developers Ltd (in official liquidation and in receivership), the official liquidator, and the insurance company which holds the bond on the estate (Liberty Insurance Ltd).

These negotiations, which have been ongoing for some time, were with a view to resolving defects in the construction of services in the estate. This would ultimately ensure that the estate was brought up to a standard that would allow for the taking in charge process to begin.

Kerry County Council made a claim on the bond in 2011 in order to have the works carried out. The insurance company informed the Council that they intended to carry out the works by private contact. It has not been possible to reach agreement on the completion of the outstanding works to date.

Since the weekend, Kerry County Council has met with representatives of the insurance company on-site and the Council has again informed them of the urgent need to have all outstanding issues resolved quickly.”

← Cahereen Heights – The latest !
An Riocht Athletes on Irish teams for Bulgaria →