Members of the Kingdom Veteran Vintage & Classic Car Club are cranking, oiling and polishing the joys of their lives in preparation for their Friday, July 17th sixth annual ‘Ballymac Car Run’ with a starting time of 7pm.

Though it’s being billed as a ‘car run’ the organisers are also inviting Honda owners of the 50, 70 and 90 persuasion to join them in the fun.

Ó Riada’s Bar and Restaurant in Ballymacelligott is the starting and finishing point. The run will take in Castleisland, Knocknagoshel, Renagown and Fahaduff before returning to Ballymacelligott.

The event is being organised as a fundraiser for Downs Syndrome Kerry and a ‘Charity Bucket’ will be available for donations on a voluntary basis. 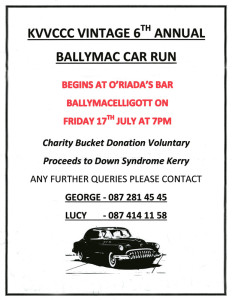 The Kingdom Veteran Vintage & Classic Car Club began its life as the Kerry Vereran Car Club in September 1979 after a meeting of vintage car enthusiasts at Farranfore Airport.