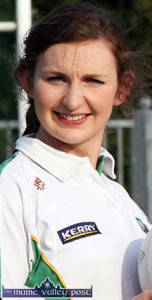 Yet another shower of congratulations rains down on the heads of Kerry’s Ladies Senior Football team as they breezed their way into an All-Ireland semi-final clash with deposed Munster champions, Cork on August 29th. This will be a repeat of last month’s Munster championship final.
In Limerick’s Gaelic Park yesterday, Desmonds and Kerry defender, Cáit Lynch led her side to a comprehensive win over Mayo.
Cáit is joined on the team by Desmonds team-mates: Aisling Leonard and Lorainne Scanlon and on the bench are locals: Aisling O’Connell, Scartaglin; Andrea Murphy, Jane Lynch and Leanne Mangan, Desmonds.
“ALAN O’Neill’s Kerry ran riot against Mayo in the second half of Saturday’s TG4 All-Ireland Ladies senior football quarter-final to book their place in the last four,” according to a report by Jackie Cahill and shared by the Kerry Ladies GAA Facebook page.
“Goals from Louise Ní Mhuircheartaigh and Megan O’Connell opened the floodgates as the Kingdom scored a comfortable eight-point victory at the Gaelic Grounds in Limerick.
“Just five points were registered in the first half but the Kingdom outscored their opponents by 2-10 to 1-6 after half-time to advance, with Mayo managing a consolation 1-2 in the closing minutes.
“And yet Mayo opened the second half in encouraging fashion and were level at 0-4 apiece, with Niamh Kelly kicking two early points, before Kerry pulled away. Mayo goalkeeper Aisling Tarpey denied Denise Hallissey with a fine save but the goals did come for Kerry, who played into the breeze after the break,” according to Ms. Cahill’s report.
Read Jackie Cahill’s report from the Gaelic Grounds, Limerick through the link here: http://www.sportswomen.ie/kerry-one-step-away/