Two local charities, the Kerry Mountain Rescue Team and the Kerry branch of the Irish Kidney Association, will be the beneficiaries of this year’s South Kerry Ploughing Championships and Harvest Show on Sunday, September 13.
A great family day out has been lined up at Fleming’s Farm in Grenagh, Fossa, Killarney and the big event is organised by the Killarney Valley Classic and Vintage Club.
The gates will open at 11.00am and visitors will be treated to a fantastic spectacle with a feast of quality activities. The event will be officially opened on the day by MEP and former President of the GAA Seán Kelly.
Details of this year’s show were revealed at a reception in 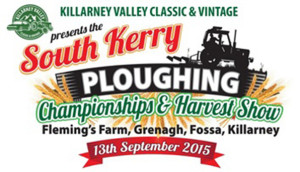 Killarney attended by Mayor of Killarney Municipal Area, Cllr Bobby O’Connell, and Kerry Rose Julett Culloty.
Cllr O’Connell said he was delighted to be able to promote such a worthwhile community event which generates an enormous amount of money for charity.
The traditional art of ploughing will be a highlight and five local competitors – including two females – will test their skills against all challengers.
The trade show will be huge with close on 100 suppliers attending, including some of the premier firms in the plant machinery, agricultural and industrial sector.
A classic and vintage truck, tractor, car and motorcycle show, stationery engines, a silage cutting demonstration and poultry sales will also feature and there will be county sheepdog trials, a demonstration by a sheep shearing champion, exhibitions and novelties.
Children and the young at heart will be really well catered for in the super Kids’ Zone and funfair, including a novelty Maze in the Maize which proved so popular last year when the main beneficiary was the Kerry-Cork Health Link Bus with the Kerry branch of the Irish Kidney Association also benefiting from a cash donation.
The dedicated food zone will be very special this year with high quality produce, including a pig-on-a-spit, and no shortage of bales of straw seating.
Two fashion shows will take place during the course of the afternoon with Killarney Rotary Club taking care of the on-site style suite.
Kerry Rose Julett Culloty and her predecessor Mary Hickey will be there on the day to select the best-dressed woman and man, with great prizes up for grabs.
There will also be a bonny baby competition and the prize for the winner will see them being fully decked out in their county GAA colours.
Numerous demonstrations will take place, including masterclasses from celebrity chef Mark Doe, interior designer Ruth O’Grady and gardening expert Trish Wharton.
There will be live music, train tours of the sprawling venue to take in all the action, novelties, sideshows, competitions, celebrities and great prizes to be won, including a two-night stay in the Europe Hotel and Resort for the winner of a ‘name the peaks’ competition.
The event will be based on a 40-acre site at Fossa with an additional 50 acres allocated for car parking. All vehicles will be directed to the main car park which is on land owned by the Europe Hotel and Resort adjacent to Fleming’s farm.
The admission fee will be €10 for adults, €5 for OAPs and over 14s while children will be admitted free of charge.