Castleisland Coursing Club will hold its 56th annual meeting over this weekend in Cahill’s Park, Tullig on Saturday 24th, Sunday 25th and Monday, 26th of October. Coursing will start on all three days at 11am sharp.
Club PRO Majella Riordan brings us up to date on the programme for the three days.
“Cahill Park, in the town land of Tullig was purchased by the membership and has been developed over the years since 1997 – the year in which the first meeting was held at the club’s new grounds.

Feature Event
“The Island Cup is the feature event with top class dogs coming to the Castleisland meeting. Ones to watch out for here are: Portane All Inn who was withdrawn in the final boylesports.com Derby 2015; Needham Simple; Blades of Hope and Kyle Bruce who showed form here last year when winning the dog trial stake. He was also runner-up in a cup in Kilflynn this season beating fancied runners on the way to the decider.
“The entry in the Dog Trial Stake this year makes it hard to pick a winner as they are all puppies. Dog and Bitch trial stakes are much sought after in Castleisland with the previous winners going on to make a name for themselves at the national meeting in Clonmel.

Top Class Competition
“The all aged bitch event has also top class competitors coming to Cahill Park. Ones to watch out for here are: Cryptic Kerry; Tobar na Molt 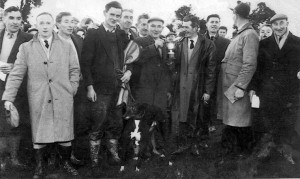 and Churchill Queen who won her trial stake here last year and Bated Breath who has already picked up silverware in Glin this season.
“The Hare Minders Stake, Three Course Duffer and a Surplus Puppy Stake will also takes place over the weekend adding to an exciting programme of coursing in Castleisland over the three days. We would like to wish all owners and trainers the best of luck over the three days,” Majella concluded.