If the floor of Castleisland Community Centre was alive with EXPO energy on Friday night, there was a power surge upstairs as Michael John Kearney launched his new ventures.
Guests, Minister Jimmy Deenihan and former Kerry Group MD, Denis Brosnan joined the Kearney family, former colleagues, friends and local community members at the event which was compered by Tralee based PR specialist, John Drummey.
Minister Deenihan said he knew Michael John Kearney from their football days and that they had many tussles on the fields of North Kerry.

Huge Contribution
He praised the initiative being taken by MJK & Associates in setting up the businesses here and he said that Kerry as a whole is not doing as well as other parts of the country. 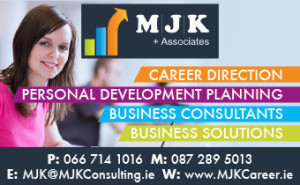 Mr. Deenihan said that Michael John has made a huge contribution to Castleisland over the years and is continuing to do so with the setting up of these new ventures.
“We’ve heard of the recent job announcements in various places around the country and in Cork in particular this week,” said Minister Deenihan in a clear reference to the announcement of a thousand jobs at the Apple plant on the previous day.
“As a government representative for Kerry I’d be the first to hold my hands up and admit that Kerry isn’t doing as well as these other places – but it’s initiatives like this that will help us,” he said.

Support and Guidance
MJK’s brother, Adrian took the mic for a brief summing up of a supporting, older brother and he pledged his acquired expertise, support and guidance for the ventures being launched.
Former Kerry Group MD, Denis Brosnan outlined Michael John Kearney’s value to the group during his almost 40 years association with them.
While citing the praises of a valued employee and former colleague he hoped that MJK & Associates would do for Castleisland what Minister Deenihan did for Limerick by granting it European City of Culture status in 2014. Turning to the minister, Mr. Brosnan said that this one initiative changed the outlook of Limerick forever. “It brought change and now the people of Limerick believe in that change,” he said.

Limelight Stolen
“The Castleisland of our youth was always a great market town but it has been forgotten and had the limelight stolen from it by Killarney and Tralee and hopefully Michael John and his team will help bring that sense of belief back to the area,” said Mr. Brosnan.
Mr. Brosnan then handed the mic back to John Drummey and he in turn called on Michael John Kearney to sum up the event and to let the MJK & Associates initiatives off down the slipway to a chorus of applause and good wishes from visitors and locals alike.