The wonderful Sharon Shannon visited and played at O Riada’s in Ballymacelligott in a sell-out concert on January 9th of this year. She was accompanied by Alan Connor. Twelve months on – almost to the date – they’re returning on Friday, January 8th for one night only.

Sold in Jig-Time
Last year’s concert tickets were sold out as presents in jig-time in the run-up to Christmas and there was enough demand in the lead-in to Women’s Christmas that another night could have been booked – if Sharon’s diary allowed – but alas.

“Early booking is advised as I have only a limited amount of tickets,” said promoter, Mary Jones.

Mary, no stranger to the promotion of events great and small, is a founder member of the Patrick O’Keeffe Traditional Music Festival and co-organiser with the late Mike Kenny of the sell-out Ciarán MacMathúna tribute concert at the River Island Hotel in March 1995. 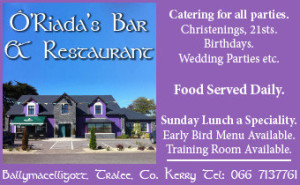 Along with Sharon Shannon – who has played in informal sessions in O Riada’s in recent times – Mick Hanley and Honor Heffernan have also appeared.
Sharon Shannon will be accompanied again in this concert by Alan Connor – a Dublin born multi-instrumentalist who plays percussion, guitar, piano and also sings and whom Sharon has described “an absolutely amazing musician.” Tickets are on sale now at €20 each and they can be booked by ringing:  087 20 64 119