The dreaded emergency general meeting – which befalls people on the floors of companies up and down the country – came knocking on the door of the Heineken plant here in Castleisland last week.
The proverbial ‘man from the company’ informed the staff there that all nine jobs were being shed and that the plant would be closed as of Friday, February 26th.
The company is moving out of its Tralee Road Industrial Estate base, lock, stock and all the empty barrels and the news represents a blow to Castleisland as its toll of unemployment grows. Distribution of the company product is believed to be transferred to either Cork or Limerick.

Drinks Industry
The town has had a link, tenuous at times, with the drinks industry throughout the county and beyond.
Ever since Browne’s Mineral Waters began its output on the Limerick Road in the 1950s that has been the case here. You could still meet people who reminisce about getting ‘the start’ at Browne’s – either washing bottles or packing cases and loading lorries for dispatch to all corners of the county.
I remember being put on a ‘Browne’s lorry as a nearly six-year-old child and my grandmother feared for my safety and filled my head with stories of sharks eating little boys who dipped their toes in the water of that foreign land. She was from Ballymacelligott and probably never set foot in Ballybunion.
God be good to Willie Kenny he was my driver that day and The Railway Bar in Ballybunion was our eventual destination. My parents worked there and ran the bar for another Castleislander, Autie Prendiville. 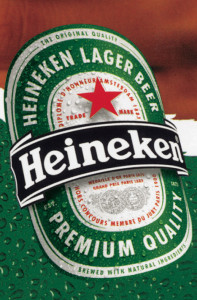 Ballybunion – The Railway Bar
Willie Kenny’s smiling face, the copious bottles or orange and the wonderful scent of sea air which hit me on our arrival are still with me; the latter brings me all the way back the minute I arrive in Ballybunion today – and The Railway Bar is still there.
Back to the future: The fact that the Heineken cup is now empty – as far as Castleisland is concerned – leaves yet another building gapingly vacant.
The town’s recent history and that of its representatives in dealing with such vacancies is woefully depressing – and there have been some missed opportunities along the way.
The building, now being evacuated by Heineken, was erected with great hope for the town’s future back in the mid 1970s. It was occupied by an English light engineering firm, Boneham and Turner from late in 1977 to the end of 1984.

After they left it was occupied by Browne’s and this started the building’s involvement with the drinks distribution industry.
Several of the now redundant staff of the plant have worked there since then. Last week’s announcement represents an injection of bad news. Nine lost jobs in a small community like this is a fair old body-blow.

Blow on Blow
It’s a blow on blow situation here as the list of empty buildings grows unabated. If there is someone out there planning to take Castleisland’s situation in hand, I’d appreciate one of the kind of emails which are flooding in at present about job creation and opportunities elsewhere.
The town has a proven history of self reliance and there are monuments in every sports ground and facility in the area.
It is only minutes from Kerry Airport; houses and accommodation are freely available here and it has a choice of competitive primary and second level schools to rival the best in the country.
In a interview with the Irish Examiner in May 2009, Cllr. Bobby O’Connell was scathing about Castleisland’s obvious ‘Forgotten Town’ status.

Jobless Figures
This, he claimed, was because our jobless figures are not disclosed and are folded in with those of Tralee. He also called on the Central Statistics Office at the time to publish Castleisland’s figures on their own as he believed that attracting investment to the town was being curtailed as a result.
That interview is now shoving on for seven years-of-age. And Aetna and Heineken were real live presences on the Tralee Road Industrial Estate and small shops and pubs dotted the streets.
Look at us now in 2016.

Land Bank
The story of the lack of unemployment figures for Castleisland is as old as that of the ‘Land-Bank’ to the people of Ballylongford and Tarbert.
Such figures for the county usually divulge the sad news for all to see. You’ll see those for Tralee, Killarney and Listowel. Then there’s a leap over the blank for Castleisland to Killorglin, Caherciveen, Dingle and Kenmare and so on. Isn’t that gas in this day and great age of communication.
And it’s been the case under all and every hue of government. Isn’t it time someone, somewhere had the balls to set it right for the sake of this and generations to come.

← A Time For Everything – A tribute to the Late Fr. Denis Costello
The late Brendan Daly, Castleisland and Scartaglin →