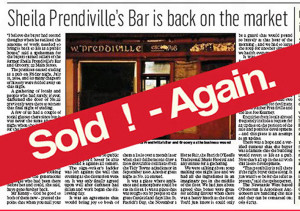 The ink wasn’t dry on my notes for The Kerryman this week when Sheila Prendiville’s Bar & Grocery was sold again. Yes – sold again.
It may not be as tight as the third secret of Fatima but the new sale is the first secret of Castleisland at the moment – and anywhere decent people sit down to have a drink and a chat.
The premises went on the market early last year and there was a lot of interest and even more curiosity as the Galwey Auctioneers signs went up in the summer of 2014.
A couple of weeks before Christmas the word was that the deal was signed, sealed and delivered. Then, only a couple of weeks ago the O’Donovan Auctioneers signs appeared in both the pub and private house windows.
The initial buyer had full intentions of restoring the building to its rightful and long established purpose as a public house and a seven-day license had been secured on that basis.
However, the Newcastle West auctioneer who handled the most recent sale did concede that the pre-Christmas buyer found that the amount of work needed to realise his plans there far outstripped his ambitions.
That’s why the auctioneer’s signs appeared on the windows as 2016 was dawning on us. Now the levels of speculation are back to where they were last summer and the future of the amazing little pub is in the lap of the Gods again.
Honest to the same God, but I never got so many enquiries for updates throughout the year as I did from people all over the world wondering about the future of No.22 Main Street.
There are people who spent parts of their summer, school holidays inside the counter at Sheila’s and there are generations of primary and secondary school pupils who bought their gallon sweets over the old pitch pine, contact covered counter.
It’s special in so many ways to so many people. Its longevity has ensured its place firmly in the history of pub and grocery business on Castleisland’s Main Street and there’s a book in the characters who took refuge along the high part of the counter.
I’ll keep you posted and if anyone out there wishes to confess to buying the place I’d be delighted to hear from them.
If you’d like to find out more about Sheila’s here’s a link to a piece I did here on its closure in July 2014. http://www.mainevalleypost.com/2014/07/11/sheila-prendivilles-is-for-sale