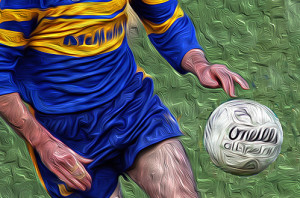 SENIORS
Our Senior Team began their Co. League campaign on Sunday when Dr. Crokes B will visit Ballymac for Round 1 of the Co. League.  This game is due to throw in at 2.00pm.  Best wishes to team management of Paud O Donoghue, Tom O Shea, Dennis O Connor and Sean Brosnan and players in their quest for a quick return to Division 3 for our Senior Team.

MINORS
CHURCHILL 3-08   BALLYMAC 4-09
Played on a very fast pitch in Churchill this was a thirteen a side game as our opponents had not enough players. Again we were guilty of not taking point chances and were 2 points to no score down after 12 minutes. David Long was fouled and Darragh Regan pointed from the free. Tomás O Connor pointed from Robert O Dowds pass. Tomás again pointed when Robert was fouled. Michael Hoare goaled from David Long pass and Robert pointed again from David’s pass.Churchill pointed while Tomas and Darragh Regan pointed for us. Michael Hoare put Tomás through for a fine goal while Churchill got the final point of the half to leave the half time score Ballymac 2-06 Churchill 0-04
On the resumption Churchill got two points with Michael Hoare pointing for us. Our opponents then took over and scored 2-02 without reply inside the next ten minutes.Sustained Ballymac pressure led to a  goal from Eoin O’Malley. Tomás again pointed while at the other end Churchill got through for a goal. Once again Tomás worked his way through for a point and James Mc Donnell sealed the win with a late goal. Micheál Reidy, Keelan Brosnan and Eddie Rogers worked hard and our subs made a valuable contribution on a day when we did not make life easy for ourselves.

REGISTRATION
Closing date for Membership registration is fast approaching.  Prospective members can register online at www.ballymacgaa.com or with any Club officer.

INTER COUNTY TEAMS
A number of players from the Parish are currently involved with various Kerry teams as they prepare for inter County action.  Micheal Reidy and Tomas O Connor are part of the Kerry Minor Football Panel as they prepare for the forthcoming Munster Minor Football Championship.  Tomas is also part of the Kerry Minor Hurling team.   Maria Quirke is now  a well established member of the Kerry Ladies Senior Football squad while Ashling O Connell is on the Kerry U14 Football panel for the forthcoming Munster Championship game against Cork to be played this weekend.   The progress of all these players to inter Co. Level is a testament to the hard work being put in at underage level within the Club.
FAOI 6
U6 Academy Boys & Girls had another great morning with a large turnout. Lots of fun game’s and learning new skills was enjoyed by all. Please practice wearing gum shields at home in preparation for the pitch in a few weeks. The academy is due to start next Sunday the 20th of March on the training pitch in Ballymac at 11.00am
FAOI 8/10
The academy is due to start for both the U8’s and the U10’s next Sunday the 20th of March at the usual time of 11.00am in the training pitch.
SCOR NA bPAISTI
The Castleisland district final of Scor na bpaisti took place on Sunday evening in Knocknagoshel. Ballymac were very well represented in most catagories. The club had 3 winners on the night. Ella Quirke won the recitation with a brilliant version of “Dancing round me Handbag”. The figure dancers, Abbey Leahy, Alice Brosnan, Laura Kelly, Emma Daly, Ella and Maggie Scanlon, Ri-Ann Zyang and Ella Quirke danced beautifully to claim the title.

Our Leiriu group were magnificent with their version of events that happened in 1916. In a very moving piece written by Maurice O Connell there were very few dry eyes in the house! The cast of Micheal and Conal Savage, Emma and Thomas Leen, Jared O Bhriain, Eimear Curran, Jamie Sugrue and Tom Long preformed exceptionally well on the night.

All three acts now go forward to the County Semi Final on Sunday 10th April at the Tintean theatre in Ballybunion.
Ballymac GAA club also won the best club award on the night.  Many thanks to all the boys and girls that represented the club so well on the night and to everyone who helped prepare the kids for the show.

BUS TO CASTLEBAR
Ballymac carried a bus load of young and not so young supporters to Kerry’s National League game in Mayo on Sunday last.  Many thanks to Jer Lynch for this organisation of this bus.  A great day out was had by all.

LUXEMBOURG ROSE
Congtratulations to Sile Reidy of Kilmore, Kielduff who last weekend was crowned the 2016 Rose for the Luxembourg Centre.  We look forward to welcoming Sile home in August for her participation in the Rose of Tralee Festival.