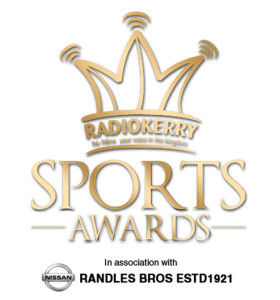 Radio Kerry and Randles Bros have just issued invitations to listeners to vote for their Kerry Sports Star of the Month.
Radio Kerry launched the Kerry Sports Awards in 2014 with the support of sponsor Randles Bros, main Nissan dealers for Kerry located at Manor West, Tralee and Muckross Road, Killarney.

Up to now the monthly award winner has been chosen by a panel chaired by multi award winning Radio Kerry Sports commentator and presenter Weeshie Fogarty. In a new departure for 2016 Radio Kerry listeners will be invited to vote for the shortlisted sports award nominees monthly.

The listeners’ vote will count for 50% of the overall with the panel vote making up the other 50%. There will be seven days to vote from Monday April 4th. The nominees for March 2016 are:
Ultan Dillane from Tralee who plays rugby for Connaught and who was called up to the Irish Squad for the recent Six Nations
Sean Lacey in Cycling: Top Kerry rider in Ras Mumhan for third year in a row 2014 / 2015 / 2016. It’s his fifth time winning the award, the first time was 17 years ago in 1999.
Bryan Cooper who won the Cheltenham Gold Cup on Don Cossack
And here’s how to vote: Call 066 71 23 666 to register your vote between7.30am to 5.30pm daily.
Vote on line at www.radiokerry.ie/sportsstar Vote via the Radio Kerry Facebook Event Page www.facebook.com/events/1017797184972144 Vote via Twitter: www.twitter.com/radiokerrysport
The monthly winner will be profiled on Radio Kerry’s Terrace Talk and featured on the Radio Kerry Website: www.radiokerry.ie/sportsstar
In March 2017 an event will be held at Randles Dromhall Hotel in Killarney to honour all the winners of the previous 12 months at which the Radio Kerry Sports Star of the Year will be announced.