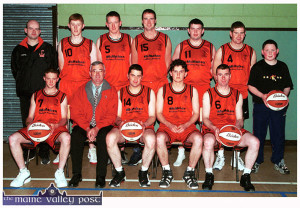 Congrats and Best Wishes to Mick and Heather

Congratulations and best wishes to former Desmonds player, Mick O’Donoghue now residing in the USA and his bride-to-be, Heather Reynolds on their wedding this weekend.

An all-rounder, Mick also played basketball and rugby with the local teams up to his move to the US. We wish them well in their future together.

Desmonds to host Neighbours Currow in Intermediate Round 2

This Saturday evening, Castleisland Desmonds senior men’s team will host neighbours, Currow in the second round of the Co.Intermediate Championship. Kick off at 6:30pm.
Having played Currow in the same round last year we are hoping to see a large crowd on the evening to support the team. The team travelled to Brosna last Sunday to play the home side in the opening round of the championship. Winning on the score of 0-10pts to 0-8pts. This game was played in lovely sunshine in front of a very large crowd.

Brosna went into an early lead through a free from Tom McGoldrick and this was followed by a point from Shane Curtin of Brosna after seven minutes of play.
Desmonds then scored the next three points from play with Cian O’Connor, Maurice O’Connell and Tomás Lynch contributing. Desmonds were in the lead with 12 minutes on the clock.
Brosna scored through Shane Fitzmaurice and this was followed by Desmonds and man of the match, Barry Lynch scoring a point from play.
Tom McGoldrick scored a point from a free to see them level the game until Desmonds full forward, Gearoid McCarthy scored a well taken point to see the visitors go in a the break leading by 0-5pts to 0-4pts.
The second half opened with two points from the boot of McGoldrick for the home side to take the lead in the game.
This was the wake up call for the men from the Island and we saw two scores from Thomas Hickey and Maurice O’Connell – who got his second point of the game to take Desmonds back into the lead with 20 minutes gone in the second half.
Brosna were trying very hard at this stage to get on the score-board and McGoldrick added two more scores for them.
But we saw great defending from Desmonds backs through Denis O’Connor and cousin, Maurice Lynch and, with Tadhg O’Connell coming into his own, it took a free kick from Hickey to see the visitors cross the finishing line on the score of 0-10pts to 0-8pts. 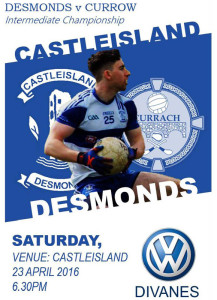 Impressive win for Desmonds Juniors
Desmonds Juniors had a very impressive win over St. Senans during the week on the score of 3-16 to 1-06. Seven players scored during a very impressive win: Stephen Bartlett 0-6; Cian O’Connor 1-02; Tommy Walsh 2 -01; Joe Kearney, Pa White and Cian Dom O’Connor 0-2 points each.
They now play Ballydonoghue on Thursday, April 28th in Castleisland with the management team of:  Edmund Hartnett, Niall O’Connor and Colm O’Shea guiding them along the way.
Under age Results:

The U-14 team played a trilling game last Wednesday evening when they drew with Castlegregory and this coming Wednesday, April 27th they travel to Ballymacelligott for a 7pm game.
The U-12 team host Knocknagoshel/Brosna in the Co.league on Sunday 24th at 6pm. They travelled to Castlegregory last week where they were beaten by 3:10 to 2:06
Desmonds U-16 Team defeated Dingle on Monday night by 3:06 to 0-10pts in the Central Region League in Castleisland. Scorers were: Stephen Murphy 1-02; Eamon Nolan 1-1; Adam Donoghue 1-0; Danny Hickey 0-1pt; David Shanahan 0-1pt and Dylan Browne scored a fantastic point from a ’45’.
They now play Laune Rangers on Monday, April 25th away in Killorglin in the Semi final at 7pm.

Club Lotto at €4,600
The club lotto draw was held on Saturday night in Tom McCarthy’s Bar. No winner of the €4,600 jackpot emerged.
The numbers drawn were: 9,11,24,30. Lucky Dip winners were: Seamus O’Connor, Sandville; Gaelscoil Aogain; Alice Fitzgerald, The Country Market Resturant; Tim O’Connor, Castleisland and Mary Sheehy, Tullig. Next draw will be on May 7th in The Poet’s Inn