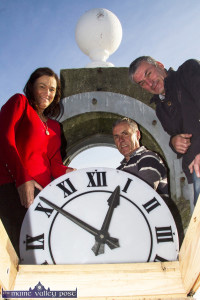 The observant among us will have noticed that the light and time has been missing from the clock tower on top of the Market House recently.
The old clock there was replaced at the end of September by the new owner, Neil Hickey.
The new clock was installed and back-lit and it made an impressive sight from its lofty perch overlooking the town.
The clock stopped recently and, according to the proprietor, it appears that there’s an issue with the heat mechanism driving the timepiece and this is causing the hands to stick.
“We have sent the mechanism back to the manufacturer and will have a replacement there as soon as we can,” said Neil.