Desmonds senior ladies played Spa/Rathmore in the Kerry Co.Championship on Sunday in Castleisland. This game was played at very high tempo and the home side went into an early lead through some great scoring from team captain Rachael Cronin, Andrea Murphy and MVP of the game, midfielder Lorraine Scanlon.

Report: Gerard Murphy
This early lead was to take them all the way to half time on a score of 0-12 to 0-6. The second half started  brightly with Desmond’s  Sandra Hartnett at full forward with some great work while making and taking scores. The home side’s lead in this game was never threatened.
Margurite Hickey, playing at corner forward, got a great point. Spa/Rathmore made a spirited comeback which was great credit to them as they were last year’s champions.

Very Impressive Kerry Player
Desmonds held on to the lead with some great defending by Fiona Griffin, Jane Lynch, Eilish Lynch and the very impressive Kerry county player, Ashling Leonard. This was to see them finish the game on the score of 2-21 to 1-12.
Well done to all of the girls and the team management and they now advance to the semi-final where they play Southern Gaels. The venue and date are to be decided. 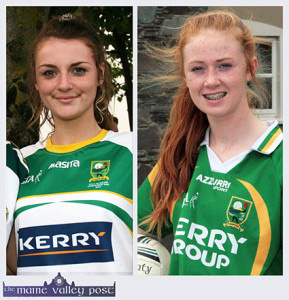 Congrats to Labhaoise and Kayla

Congratulations to Labhaoise Walmsley and Kayla O’Connor who were on the Kerry Ladies winning U-16 team that won the Munster final on Saturday in Mallow against Cork.

No Lotto Winner
There wasn’t a winner of the €4700 club lotto held in the Poet’s Inn on Saturday night.
The numbers drawn were: 21, 25, 27 and 32. Lucky dip winners were: €30 Pat Tarrant with €20 each to: Georgie O’Callaghan, MJ.O’Sullivan, Paudie Herlihy and Hugh O’Connell. Next draw is on Saturday, May 21st with the venue to be decided.

Strictly Come Dancing
The Desmonds Ladies Club in conjunction with Muire Gan Smal Presentation Primary School are hosting a strictly come dancing extravaganza./ This event is taking place on Friday, June 10th in the Castleisland Community Centre at 7-30pm. Tickets can be purchased at the school or at Lynch’s Pharmacy.

Good Man Tadhg
Congratulation to Tadhg O’Shea on winning the Under 14 Skillstar challenge in Tralee recently. He now represents Kerry in the National Finals at the GAA Games Development Centre in Abbotstown Dublin.

Brawl in the Hall
The Desmonds GAA Club members are organising a white collar event the Brawl in the Hall on Friday, July 8th. The event has a 14-fight card and there will be a live band and a full bar on the night.
Seniors Men’s Fixtures:

← Castleisland Summer Fest is a Reality – Look at the Leaflets!
The late Con O’Connor, Coolnageragh, Scartaglin →