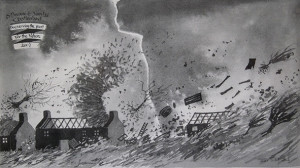 If you think that we had it rough in the weather department around here over the Christmas period, spare a thought for the many people in private homes and business premises in other parts of the country who weren’t as fortunate.

Bad and all as the festive season fare was, we fared well enough when considered alongside the two Christmas Eve storms of the late 1990s. There were stories of widespread ESB blackouts and neighbours sharing cooking facilities and using those of community centres in the Christmas Day crisis the storms left in their wake at that time.

During the run of the hugely popular Divane’s Calendar, from the early 1990s to very recently, they researched and chronicled an event in local folklore which became known as ‘The Night of The Big Wind.’

It was a time in which people had little or no means of weather warnings or forecasts – other that the odd behaviour of animals – to prepare them for impending danger.  Whatever few possessions they had were at the mercy of the elements and the landlords.

The article in Divane’s Calendar outlined the events of Small Christmas Night 175 years ago on the Monday night just gone.

twelfth night of Christmas was drawing to a close. All around the district

of Castleisland, animals and stock were checked and people settled down to

pass the evening. In every window of the valley of Castleisland each home

to a winter’s evening.

fire, swapping stories and having the perennial discussion on the state of

the weather. Little did anyone realise the night that lay in store.

Earlier that evening, the wind had freshened and continued to increase

in ferocity . At about 10-30pm it became a high gale and began to cause

damage. By 1am on Monday morning, 7th January the storm had increased to a

hurricane and began its punishing journey. It even exceeded the violent

Wind the powerful force tore through Ireland wreaking havoc and

destruction where ever it went.  It is important to remember the context of

the time: Weather  forecasting was rudimentary and very inexact.;

communication throughout the country was slow and unreliable and towns and

villages relied on gaslight. The sudden storm would have been a complete and

and windows were broken with impunity. As in most natural disasters, the

poor suffered most. The loss in agricultural produce was immense with well

Hay that was carefully husbanded throughout the year was destroyed in

minutes. Trees were uprooted in the blink of an eye. Cattle were drowned and

swept away while harvested crops were destroyed in an instant.

were blown by the gales and haysheds were completely demolished.  Another

farmer, called O’Riordan from Dulague also suffered. The walls of his

cow-house were made of mud and it had a thatched roof. This was completely

destroyed by the storm. The wind and flood then proceeded to carry his five

cattle four fields away. Luckily, his neighbour, a man called O’Connell, who

was trying to save his own hay, saw what was happening and managed to rescue

the cattle. In all the excitement he managed to knock four of his teeth out

and didn’t notice until the following morning!

Ten hours later, the big wind had blown itself out and bewildered people

were left to count the cost. People were shocked to see the destruction,

with trees blocking roads and making travel impossible. Many a comfortable

man became a poor one after the night. Miraculously, there were no recorded

deaths in Castleisland following the night of the Big Wind.

Appeals for aid for those who suffered were made on behalf of the poor.

Local clergy and charitable organisations were quick to begin their work. In

The Tralee Mercury the following editorial spoke for all: “We do trust

that God who tempers his wind to the shorn lamb, will inspire the hearts of

the wealthy among us to play the good Samaritan to the poor.”

The night of the Big Wind, almost 170 years later, is still retold from

the folklore and history of Castleisland having been passed down from

← Cllr. Gleeson makes Light of his Generous Gesture
A Gathering Launch – The Return – in Sheila’s →