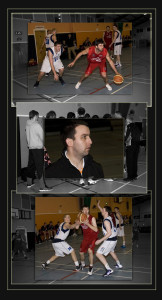 Team Garvey’s St. Mary’s  bounced back from last weekend’s defeat to Maree by securing a 10 point, home win over Cork side Fr. Matthew’s. The early part of the first quarter was disappointing as both side missed several scoring opportunities but the pace picked up as both sides found their target. The side were level on 12 points apiece with 2 minutes remaining but it was the home side that finished just one point ahead at the end of the quarter.

Garvey’s upped their game in the third quarter, steals and great scores by Declan Wall, Declan Cahill and John Galvin along with great shooting from Seamus Brosnan, Culhane and Griffin saw Garvey’s push ahead to lead by eight at the end of the third.

Team Garvey’s pushed ahead as the final quarter progressed but a determined Fr. Matthew’s chased the game to the end with both Chopra and Fleming scoring seven and eight points respectively while Sean Cantwell was outstanding from the line. Dan Griffin came into form for Garvey’s hitting 10 points for the quarter.   Garvey’s took the game on a final score-line of 79 points to 69.

Team Garvey’s next game will be at Tolka Park Dublin v Tolka Rovers on February 22nd.  Tip-off is at 7.30pm

Team Garvey’s, Dónal McCarthy going for the board in spite of the attention of Maree’s Matt Hornbuckle (left) and Liam Conroy during their Division 1 National League game.  ©Photographs: John Reidy

← The Earls of Desmond: The Rise and Fall of a Munster Lordship
Team Tom McCarthy on a Winning Streak →