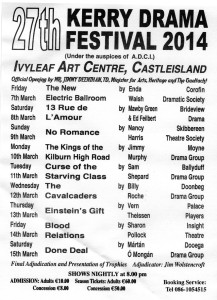 Hot on the heels of the sell-out, one-night-stand performance by Aidan Dooley of his one-man show ‘Tom Crean – Antarctic Explorer’ on Friday night comes the announcement of the Kerry Drama Festival dates and line-up. A intriguing, nine nights of drama will get under-way on Friday, March 7th. The festival will be officially opened by Minister for Arts, Heritage and the Gaeltacht, Jimmy Deenihan, TD. The poster here carries the list of plays, authors and performing groups.

This is the  27th annual Kerry Drama Festival to be held at the Ivy Leaf Art Centre in Castleisland.

It will run from the afore mentioned Friday, March 7th to Saturday March 15th.

The event is held under the auspices of the Amateur Drama Council of Ireland. It has been held in Castleisland each year since its revival in 1988.

Adjudicator for the week is the Co. Down based Jim Wolstencroft of the Guild of Drama Adjudicators.  Admission: Adults €10. Concession €8.

The Kerry Drama Festival is part of the All-Ireland circuit of festivals under the the 1953 formed Amateur Drama Council of Ireland. Then a number of festivals came together and formed the All-Ireland circuit.
Groups can qualify for the All-Ireland Drama Finals in Athlone by competing and gaining points at any of these nominated festivals. Points are added from the two best awarded. In the world of amateur drama these weeks are their Cheltenham, their holidays and their lives.
← Castleisland Fire Brigade 1984
Tom Crean – A Time Polished Theatrical Gem →