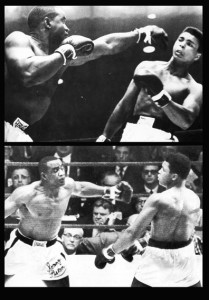 Scenes from Miami Beach on February 25th 1964 and the sporting upset of the century. Only for listening to Sunday Miscellany last Sunday morning and Morning Ireland this very morning I would have forgotten the importance of the day.

I invested so much time reading every Clay V Liston account I could get my hands on through January and February of 1964.

As the tension between the reigning world champion Sonny Liston and his cheeky, young challenger rose to boiling point newspapers were thriving and flying off the shelves. I was sent in to Davy Griffin’s to get The Evening Herald every evening. I had to get through what was in it on the fight on my way home as I wouldn’t get to see it again. The interest in that particular fight was incredible and it wouldn’t surprise me if it was the biggest sports story of the year. Liston was the murderous looking, hooded monster of the ring at the time.

He was not too popular here as he demolished the clean-living Floyd Patterson in a single round to take his world title and did an equally brutal job on him in the re-match. My elders and boxing mad neighbours didn’t care for Cassius Clay’s ‘big mouth’ and they were all sure he’d suffer thre same fate as Patterson. There was a gathering in our house around the radio late that night. We didn’t see the TV recording of the fight until a night or two later. How times have changed.

It was a strange time with some of the most amazing stories coming out of America. John F. Kennedy has been assassinated only the previous November and the sales of newspapers must have been at an all-time-high. I had a scrap-book of that fight and several others of the time. What an amazing journey and story the life and times of the great Muhammad Ali has been so far. It’s still facinating even for people with no comnnection with boxing or sport. That iconic, World Heavyweight Championship Fight took place 50 years ago today – imagine that.  I couldn’t let the day go.