Castleisland Desmonds are North Kerry Division 1 winners following their eight-point victory over Beale in Duagh on Saturday. They didn’t have it all their own way as Beale were well up for the game in the first half.

James McMahon set the pace for Beale with early points and they dominated mid field in the opening half and lead in the early stages. Sean Lynch got the only goal of the half at the end of a great solo effort from a 60 metre run.

Even so, Beale lead by 0-7 to 1-3 at the break.  Desmonds gradually wore down Beale in the second half – their two goals being the big difference between the sides.

The first came from Pa White when his shot at goal was deflected to the Beale net off a defender and, with nine minutes left Thomas Hickey blasted home goal number three and there was no way back for Beale after this.

Club Results: Desmonds Minors lost to Laune Rangers by just one point in the semi- 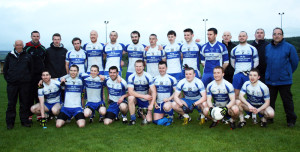 The U-14 boys defeated Dingle 3-13 to 0 -15. Scorers here for Desmonds were:  Adam O’Donoghue 0-2; Michael Prendeville 1-3; Eamon Nolan 1-3; Ben Cooney, Danny Hickey, Stephen Murphy, Maurice Ryan and David Sheehan all with a point each .