Excitement is mounting these days in traditional music circles in the locality and out beyond.  It’s particularly so among the huge numbers of fiddle players and their music loving followers therein.

The weekend here in the Castleisland and Scartaglin areas will see a gathering of fiddle players and their disciples the like of which was never seen here before.

The World Fiddle Day idea – at least the Irish version thereof – is firmly rooted in Donegal and the man behind it there is Caoimhín MacAodha.

World Fiddle Day is celebrated annually on the Saturday closest to May 19th. It’s the one day when players of the ‘fiddle family’ of instruments – violins, violas, cellos, double basses, hardangers, viola da gambas etc. can celebrate its beauty.

Local musician and composer, PJ Teahan took a leaf from the Donegal man’s book last year and advertised a ‘one-night-only’ session at Browne’s Bar on the Friday night of May 17th here in Castleisland. It was a huge success and it broke out of its advertised confines and took on a life of its own.  It headed for Scartaglin on the Saturday afternoon and back to Castleisland that night before settling in and wearing itself out in Sheila Prendiville’s.

The planning is more ambitious this year. And yet it’s simple in its execution and layout.

PJ has drawn a team of musical colleagues around him and each of them allotted tasks. What could be accomplished before Friday night’s launch – at Browne’s Bar at 9-30pm – has been. 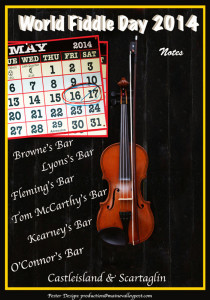 Con Moynihan, Mick Culloty and Tom O’Connell are all on PJ’s team and he has a special role for Nicky McAuliffe in Saturday’s centre-piece in Lyons’s Bar in Scartaglin at 4-30pm.

The idea of the commemoration of the 1969 recording of ‘The Star above the Garter’ is as intriguing as it’s appealing to the musicians and their followers who are expected to flock to Scart on Saturday afternoon.

Needless to say, all the great exponents of the fiddle and other instruments indigenous to the Sliabh Luachra area will be fondly remembered on the occasion.

The open sessions will get under way there in Fleming’s, Lyons’ and O’Connor’s bars on Saturday at 2pm. The Scartaglin Heritage Centre will also host an afternoon of events to compliment the style of the programme in the local pubs.

Lyons’s Bar will then host the centre-piece of the weekend at 4-30pm.  There, a surprise – of a historical nature – will be sprung on those in attendance.

The coming generation of musicians will have their moment in the sun too as Joanna Moynihan’s amazing reproduction of the ‘The Star’ LP cover will be unveiled in Lyons’s.

The programme of events for the weekend is as follows: Friday night.  Browne’s Bar will host  Aidan Connolly, Tom McElligott, Con Moynihan and friends. Saturday:  Open sessions in all pubs in Scartaglin from 2pm. Scartaglin Heritage Centre will also be open for tunes and tea /coffee and snacks.

At 4.30pm all fiddle players and their fiddles to assemble at statue for a commemorative photograph.

At 16.45pm. the presentation of a fiddlers photographic collection to Ned Vaughan in Lyons’s Bar.  This will be followed by a talk and ‘the surprise’  by Nicky McAuliffe and ‘The  Star Above The Garter’ tribute. Saturday night: Taxi bus to Castleisland  at 8pm to 9pm.

Browne’s Bar will host Connie O Connell and Eibhlin DePaor and they will welcome musicians to join them at 10pm. At Kearney’s  at 10pm Con Moynihan, Denis O Connor and Aidan Connolly will welcome musicians to join them there. And at 10pm in Tom McCarthy’s Kitchen ,  Mick Culloty, Mike Rice and friends will also invite a gathering to join them. There will be a scattering session at Kearney’s Bar on Sunday at 12noon and they’ll all be gone home by Tuesday evening.

It’ll be an ‘All Sails Aloft’ kind of weekend and one hell of a session of music by the looks of it now.