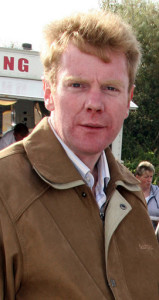 The handful of hardy annuals known locally as the St. Patrick’s Day Parade organising committee members are walking with a bit of a spring in their collective step since the weekend.

They were out at the crack of dawn on Sunday decking the town with flags and bunting in preparation for Tuesday’s Lá Mór.

They’ll have to do it all over again before the big day as the storms broke the bunting one night this week.

While there is the traditional, financial generosity towards the group and its altruistic activities – and it is just that as none of them gain a halfpenny from all they do – they got an unexpected, welcome windfall at the weekend.

“We’re grateful to all our sponsors and you can see the results of their contributions flying now from the lamp standards throughout the town. I have to mention a decent cheque we got from the local branch of Tralee Credit Union,” said committee member, Ted Kenny.

“It came out of the blue and signed simply ‘From Your Credit Union’ and it means that we can continue to make the day as good as it’s always been,” said Mr. Kenny.

We’re looking forward to a good turnout on the day and hope the community from Castleisland and surrounding parishes come out in large numbers to support us,” he concluded.

The annual parade is scheduled to commence at 1.30pm from McElligott’s on Tralee Road and floats and groups and individuals are welcome to make the effort and join in. There will be a special welcome for the often undervalued, innocent bystanders.

I mentioned here at the weekend that our Atlantic lapping, distant neighbours  in Annapolis, Maryland in the USA  were to honour Currans native,  John ‘Seán’ Barry as their Grand Marshal for Sunday’s  St. Patrick’s Parade there. Mr. Barry has

been active in the Irish-American community over there for many years. Theresa, his daughter, forwarded a couple of photographs of their great day  John Seán Barry attended secondary school here in Castleisland before heading off to ‘The States’ like many of his contemporaries.

Over 80 groups participated in Annapolis, Maryland’s 3rd annual St. Patrick’s parade. Bands from as far as New York and Boston made the trip through the snow to enjoy a sunny, Spring day which turned out to be perfect for a parade.

Anyone available to help out with stewarding during the Castleisland parade please contact: Ted Kenny on 087 28 42 899.