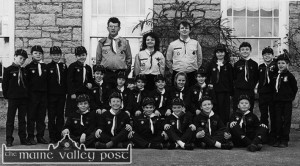 As I was in the vault at all I thought I’d look up other St. Patrick’s Day stuff from the recent past. And I happened upon this little bit of local history.
I was going to withhold the names for a day or two but, it being a day of celebration, I thought I’d just paste them in and be done with it.
On St. Patrick’s Day in 1990 the newly formed Castleisland Cub/Scout Unit went on its first, official outing. They all met up and attended 11-30am mass at the Church of Saints Stephen and John. After the mass they posed for this, their first unit photograph. The photograph was taken in the Presentation Convent Garden or ‘The Nuns’ Garden as it is more popularly known locally.
Front row from left: Pat McElligott, Michael Horan, Colm Breen, Donnacha Ryan, Finbar Courtney and Tim Murphy. Middle row from left: Maeve Breen, Helen O’Connor, Mary O’Brien, Cara Brosnan, Elizabeth Broderick and Eileen O’Brien. Back row from left: Aidan Ryan, Danny Walsh, Eoin O’Sullivan, Geraldine Brosnan, Timothy Murphy and Margaret Fitzgerald, Cub/Scout leaders; Gerard Murphy, unit Leader; Amanda Kennedy, Brian Walsh, Emmet Fleming and Tom Broderick. ©Photograph: John Reidy 17-3-1990