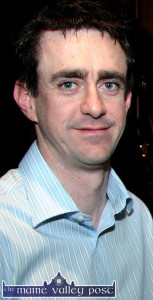 It was a delighted Alan Ring who drove his Subaru Impreza World Rally Car over  the finish ramp of the Circuit of Kerry Rally in Tralee on Sunday evening.
The Castleisland man, co-driven by West Cork man , Adrian Deasey led his home rally from start to finish although he did survive a late challenge from Welsh visitor, Steve Wood in a similar car.

Report by Sean Moriarty
Ring was just three seconds in front of Wood, who is co-driven by Abbeyfeale’s Keith Moriarty, as the lead cars entered the sixth and final stage .
The Munster Joinery man held his composure and set the fastest time over the undulating back roads between Knocknagoshel and Ballymacelligott.  Wood said he over drove the car on the final stage , an somehow, dropped ten seconds to the flying Ring.
“It was a proud moment to drive through my home town this morning with number one on the door but even better to be back here as winner of my home national rally. This is only our fifth event in this car, there is a lot more to come,” – the Munster Joinery man said.
Ring will contest this coming weekend’s Monaghan Stages Rally as part of his Triton Showers National Rally championship and the local Rally of the Lakes in two weeks time.
Wood’s slow time through stage promoted former Circuit of Kerry winner Derek McGarrity and his Beaufort co-driver Diarmuid Falvey to second. The Antrim/Kerry pairing were holding third place for most of the day – their biggest issue all Day was readjusting to each other having not shared a rally car since the Galway International Rally in 2009.
Kerry Winter Rally winner Daniel Cronin finished fourth. Navigated by Killarney’s Shane Buckley, the Bantry man’s older Impreza was never going to match the more modern  machinery around them and they did extremely well to set the times they did.
Ballyduff-born Kevin Barrett and Sean Mullally were fourth and took home the best Kerry Motor Club crew trophy in another Impreza. Their run was hampered by a lack of a fifth gear for much of the latter part of the rally.
Mike Quinn looked certain to take this award and honours in the two-wheel drive section of the rally but put his Ford Escort off the road on the third run over Mount Eagle.
Other local crews to do well included Killarney’s Derek Daly and Brian Doherty who finished second in Group N in their Mitsubishi Lancer. Charlie and Johnny Hickey were also second on their class , the Escort crew’s pace improved in the second half of the rally after they changed the gear ratios to suit the fast north Kerry roads.