All for the Cause: Mike Hanifin’s gash pours blood as he is being treated on the sideline by Listowel Celtic and Castleisland AFC mentors during Friday night’s drawn Greyhound Bar Cup Final between the two sides at Mounthawk Park, Tralee. ©Photograph: John Reidy

It looked as if Castleisland’s hopes of winning back-to-back Greyhound Bar Cup titles were gone at Mounthawk Park on Friday evening when they trailed Listowel Celtic 3 – 2 going into the second minute of added time.

But the Islanders showed tremendous spirit and character to keep fighing to the final whistle and they were rewarded on the stoke of full time with a sensational equaliser.

The best man on the pitch, Sean Brosnan set it up and wily old fox, Shane O’ Loughlin took great pleasure in tucking it away.

It was another great game between the arch rivals which ebbed and flowed and produced some great passages of football with every player on the pitch giving their all.

Goal of a Fortuitous Nature

Early exchanges were tentative but Castleisland went ahead in the fifth minute with a goal of a fortuitous nature.

A foul led to a free kick out on the wing.

It was superbly delivered right into the goalmouth by Sean Brosnan and, as it swirled in the strong breeze, the unfortunate Micheál Lynch in an effort to clear his lines put the ball past his own keeper.

Castleisland then forced two consecutive corner kicks and from the second, Aidan O’ Callaghan headed narrowly wide. Celtic then hit on the break with Paudie Quinn playing in Ian Murphy but he skyed his effort on goal.

In another attack, Kevin Mc Carthy linked up with Mike Woods – who made a great run down the wing and laid the ball off to Ian Murphy but his low shot missed the target.

Celtic equalised in the 28th minute with a rather soft goal where the lines of communication at the back for Castleisland broke down with Aidan O’Callaghan and Kevin Moran leaving the ball to each other. As they hesitated the ball fell luckily to Aidan Quinn and he steered it over the line.

Paudie Quinn then won the ball out on the wing and sent in an inch perfect cross to Bryan Murphy but he could not keep his header down with the goals at his mercy.

Castleisland then forced a corner which was floated in by Sean Brosnan and a header by Aidan O Callaghan was just over the bar. Castleisland had a lucky escape just before half time after more uncertainty at the back but Kevin Bambury was unable to take advantage of it. Celtic began to dominate the game in second half and looked the more likely side to win the game.

Mike Hanifin had to retire early in the second half for Castleisland with a head injury and he was replaced by Tommy Feehan. Celtic were now perfecting their passing game and Castleisland were finding it harder to get possession.

However, they were caught flat-footed in the 62nd minute when a bit of magic by Sean Brosnan left a defender on the deck and when he reached the byline he drilled the ball right across the goalmouth and Dean Poolman finished it to the net.

Casteisland’s lead lasted only two minutes when they failed to deal with a Paudie Quinn free kick out on the wing and Ray Huggard handled the ball leading to a penalty kick. Paudie Quinn put away the penalty in clinical fashion. Celtic then put ten passes together without Castleisland touching the ball and, at the end of it all, Paudie Quinn shot wide. In the 75th minute Cetic forced two consecutive corners and, from the second, Paudie Quinn found Bryan Murphy and he headed powerfully to the net.

A foul on Sean Brosnan then led to a free kick for Castleisland 10 yards outside the box. The free kick was well hit by Brosnan but Celtic ‘keeper, Cathal Keane dived to his left to make a good save.

Castleisland got a couple of free kicks in the concluding stages but none of them came to anything. As the game went into added time it looked as if Celtic would be champions. However in the 92nd minute Castleisland got a throw-in near half way. This was added to by Aidan O’Callaghan and it fell kindly for Sean Brosnan.

Brosnan’s electric turn of pace left a defender stranded and, as he entered the box, he drilled the ball low right across the goals where Shane O’Loughlin was coming in and he showed nerves to steel to drill the ball home from close range for a sensational equaliser.

It was a game Listowel Celtic will feel they threw away but full marks to Castleisland who never gave up and were rewarded at the very end. Listowel will be very disappointed they let this game slip away so late on while Castleisland will be delighted to get another bite of the cherry. 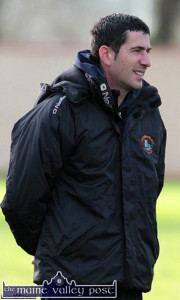 Castleisland AFC manager, Mike Mc Carthy said he was delighted with the late equaliser. “It looked as if we were losing as the clock ran down but we showed great heart and spirit to dig out an equaliser,” he said.

“It was a hard game where everyone put in a huge effort and we definitely were the happier side coming off the pitch. When we went 3 – 2 down I put 3 up front but kept Aidan O’Callaghan back until we got free kicks,” said Mike.

“We were bidding for our third Greyhound Bar title in four seasons so the stakes were high and we knew it was going to be a close game. We got a great start with an early goal but the head injury to Mike Hanifin which necessitated treatment off the pitch disrupted our rhythm and it was during this period that we conceded the equaliser.”

“We were very happy with the draw at the end as we know we can play better than we did this evening. It’s another great season for the club as our B team is in the Division 1A Final. I’m hoping we can win the replay as I’m stepping down as manager after that and will go back playing with the team again,” McCarthy revealed.