Further meetings are to be held this week between Patrick O’Keeffe Traditional Music Festival Chairman, Cormac O’Mahony and Seán Linnane of North, East and West Kerry Development over revelations in a pair of A4 documents made public by Mr. Linnane. The documents stated that the festival committee had received support to the tune of €21,000 between 2007 and 2013.

The documents were circulated at the second Castleisland Chamber Alliance formation meeting at the River Island Hotel on September 29th and have been the source of comment and query since.

The festival, which was established in 1993, is one of fifteen groups stated to have been in receipt of varying degrees of substantial sums of money over that specified period of time.

However, no such grant aid has been received by the Patrick O’Keeffe Traditional Music Festival committee in spite of repeated requests from the committee for funding vital to the continuation of the annual October bank holiday weekend event. 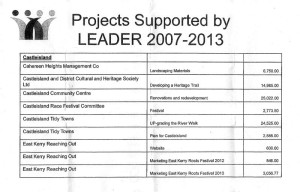 The festival has become one of the major planks in the economic structure of the area and relies heavily on the goodwill of the business community of the town and grant aid from outside agencies.

The 2015 festival will open on Friday night at 8pm with a gathering session and the organisers are deeply grateful to the Arts Council of Ireland and to the people of the locality who have made the event possible.

Committee members are currently canvassing financial support for the festival throughout the town and, yet again, the business community is 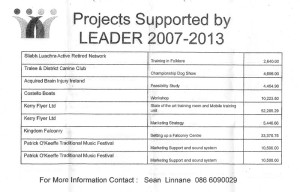 backing it without a murmur.

There is, of course, a question of the circulated document and its implications for the funding of the festival.

The fact that the festival committee didn’t get a brown cent of the stated €21,000 has to be repeated in the course of the fundraising effort – as one would expect.
An explanation is being sought this week as to how a state funded agency could potentially inflict serious damage on a strictly voluntary committee working for the good of the economy of its local community. We’ll keep you posted.