The welcome sign on the impressive entrance to Cahereen Heights.

The Meadows at Cahereen Heights about to welcome new neighbours.

Auctioneer, Laura Stuart-O’Sullivan outside two of the houses in The Meadows area of Cahereen Heights in Castleisland which will be on view on Saturday from 10am to 12noon. ©Photograph: John Reidy

The kitchen area in one of the houses.

Stuarts Auctioneers have announced the next launch of next phase of house sales at Cahereen Heights. They are holding an ‘Open Day’ there on this Saturday, November 21st from 10am to 12noon.
The properties, outlined below, will be released to the market on Saturday, November 29th at 9am.The houses being released are: No. 18; No.24 and No. 25, The Meadows and they, Three-Bedroom Semi without ensuite are going for €90,000.
Also for sale in The Meadows area of the estate are: No. 31, No. 34 and No. 35 – three bedroom ensuite going at €100,000. Going on the market also are: Two X four-bedroom detached at No. 6 and No. 7 in The Grove area going on the market at €165,000. 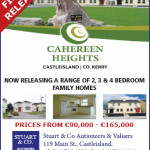 Upward Trajectory
The renewal of interest in the property market in Castleisland has maintained its upward trajectory which it seems to have set out on last summer.
There was competition among first-time buyers last June when Stuart Auctioneers announced that they were about to release a block of eight houses in Cahereen Heights.
The houses were sold on a first come basis and this sparked an all-night vigil as the Saturday morning of the sale loomed.
That event provided Castleisland with its first glimpse of the camping-out culture which had become the norm in the run-up to auctions in many of the bigger population centres around the country. It was a culture which started and belonged to the height of what has become known as the Property Bubble.

Property Ladder
Parents sat out the night for children hoping to get their feet firmly on the property ladder on the estate which had just seen three quarters of a million euro spent in a rejuvenation scheme which went on from this time last year to May.
The estate came to the attention of the nation and well beyond last November when waste water tanks collapsed on the extensive, roadside green. It was this incident which triggered the raft of work which resulted in the estate getting a complete overhaul including: new footpaths; street lighting and sewage system.