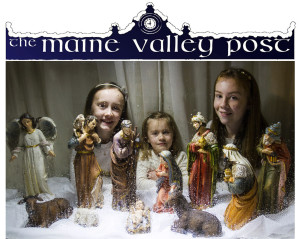 Christmas Greetings to all our supporters: advertisers, advisors, ‘likers’ readers and well-wishers all over the world and especially Castleisland and Maine Valley people wherever you are tonight. We wish you A Happy Christmas and A Healthy and Peaceful New Year.
Thank you for all your support during the year just slipping away from us and we look forward to facing into 2016 when it comes. Go Raibh Maith Agat, Tabhair Aire agus Slán go Fóill. – John Reidy, Christmas Eve 2015.

O Holy Night: The Hartnett sisters with their street-facing crib on the Limerick Road side of Hartnett’s Corner on this special evening. Little Nell Hartnett is pictured with her sisters, Lizzie Mai and Nora Ann as they put the Baby Jesus in his crib on this holy night. ©Photograph: John Reidy 24-12-2015
Here is one of the most referred to Christmas poems – in Ireland anyway. It’s A Christmas Childhood by Co. Monaghan poet Patrick Kavanagh. It’s all about a Christmas Morning in 1910 when the poet was six-years-old. It’s full of the magic of Christmas and loaded with the kind of memories that will click with anyone who grew up in the countryside: A Water-Hen screeched in the Bog or Across the wild bogs his melodeon called to Lennons and Callans. – Enjoy.

A Childhood Christmas
Patrick Kavanagh 1904 – 1967
One side of the potato pits was white with frost—
How wonderful that was, how wonderful!
And when we put our ears to the paling post
The music that came out was magical.

The light between the ricks of hay and straw
Was a hole in Heaven’s gable. An apple tree
With its December glinting fruit we saw —
O you, Eve, were the world that tempted me.

To eat the knowledge that grew in clay
And death the germ within it! Now and then
I can remember something of the gay
Garden that was childhood’s. Again.

The tracks of cattle to a drinking place,
A green stone lying sideways in a ditch
Or any common sight the transfigured face
Of a beauty that the world did not touch.

My father played the melodeon
Outside at our gate;

There were stars in the morning east
And they danced to his music.

Across the wild bogs his melodeon called
To Lennons and Callans.
As I pulled on my trousers in a hurry
I knew some strange thing had happened.

Outside the cow house my mother
Made the music of milking;
The light of her stable lamp was a star
And the frost of Bethlehem made it twinkle.

A water hen screeched in the bog,

Crunched the wafer ice on the pot holes,
Somebody wistfully twisted the bellows wheel.

← Clouds Gather on Cahereen Heights Land Sale
GOAL Mile Gains €2,000 at An Riocht in the Rain →