Mayor of Kerry Cllr. Pat McCarthy will launch a new book on the disappearing legacy of Kerry’s vernacular architecture. The launch will take place at the County Library in Moyderwell, Tralee on this Thursday night, March 10th at 7pm.
Castleisland native and former Kerry County Council Conservation Officer, Eamon Fleming is the editor of The Home Place. The book is an inventory of the traditional, rural architecture of North and East Kerry.

Fallen Into Ruin
“County Kerry has a rich heritage of vernacular/traditional buildings. Unfortunately over the past two decades many of these structures have either been demolished to make way for new buildings or simply fallen into ruin,” said Mr. Fleming.
“It is important that we protect what remains of our vernacular heritage and record it for posterity. 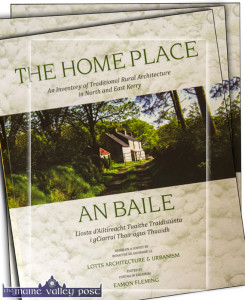 This publication has come about as a result of a survey of vernacular/traditional architecture in North and East Kerry, which was carried out in early 2013 during my time as conservation officer with Kerry County Council.

Appeal to the General Reader
“The survey, which was conducted by Lotts Architecture and Urbanism, Dublin, was finalised in November 2013.
“It was funded in the main by North, East and West Kerry Development with some assistance from Kerry County Council.
“It was intended that the results of this survey would be published in a form which would appeal to the general reader. This publication has been funded entirely by Kerry County Council.
It is anticipated that similar surveys will be carried out in South and West Kerry in the near future,” Mr. Fleming concluded.