As the first St. Mary’s Basketball Club Blitz was held in the Astor Ballroom / Cinema in 1970, for this year’s ‘Blitz Programme’ Colm Kirwan thought it appropriate to look at the business life of Castleisland in the course of that year.

Colm looked at how the town and surrounding areas and parishes were serviced in terms of the wide range of businesses operating back then.

Even with that kind of time span and things changing on a daily basis, there are still survivors from those days on the business landscape of the town today.

If the changes between 1970 and now could somehow be encapsulated in a kind of time-lapse film it would make the rough and tumble of the Aintree Grand National look like a leisurely stroll.

Keep in mind when reading Colm Kirwan’s piece that his terms of reference were as narrow as that one year.

Businesses here in Castleisland closed down that time only if someone died and there was nobody left to carry it on.

The year of 1970 was also some three years before Ireland voted to enter the common market as members and all the sweeping changes that brought about.

Tea or Something Stronger

Colm also points out that he’d welcome any amendments to his piece and there may well be places of business omitted from the list.

Make a cup of tea or knock the cap off a bottle of something stronger and be prepared to be taken away back.

As an appropriate soundtrack to the year under the scope try The Long and Winding Road by The Beatles or Bad Moon Rising by Credence Clearwater Revival to help put you right in the groove. Then take another good swig of that something stronger to get you right back out of it – or deeper into it – depending on your personality or penchant for nostalgia.

Castleisland in 1970 – The Times They are a Changing

According to the 1971 census Castleisland had a population of 1929 people and was the fourth largest town in Kerry.

Almost 600 of those who filled the census form declared an occupation. The picture which emerged looked like this: Commerce 170; Services over 100; Manufacturing – Browne’s; Rhyno Mills 110 and Construction 50.

Agriculture was the back bone of the economy and we were largely a market and services centre. These were largely small, family run businesses.

They were personal as people rambled in and out for a chat and for the social interaction. Many of them had ‘tic books’ so families were not deprived of the essentials.

You paid what you could when you had it. It helped to create a wonderful sense of neighbourhood and much of that has, sadly, gone.

Socially, Castleisland was vibrant. Some of the best show bands in Ireland came to the Astor Ballroom on Wednesday nights. We had our very own and famed Michael O Callaghan’s band.

There was the High Chaparral and the Hideout where you had live music, a chicken supper, an exemption until 1.15am for 7/6.

Drink was an optional extra! There was a Feile Cheoil in May; a Carnival for three weeks on the site of the present Divane’s Garage in June/July and a visit from the Listowel players with a performance of Big Maggie in the Astor.

You had a rich diversity of sporting and leisure clubs and we were better served than most towns of a comparable size anywhere in the country.

We wish to thank all of those who helped to compile the list below. We apologise for any inaccuracies and would welcome any amendments. 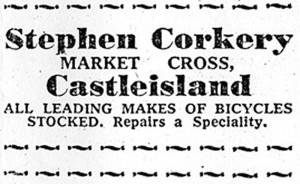