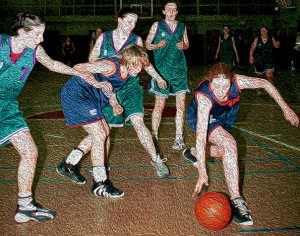 U-12 Girls Division One Cup

St. Mary’s and Team Kerry Bobcats went head to head in the U-12 girls division one cup final on Sunday.

With just 1.27 remaining in the third quarter the Ballymac side led comfortably having held their opponents scoreless.

Both Amy Curtin and Mikayla Buckley made late scores from the free throw line to put St. Mary’s on the score board.

The tables were turned in the second quarter and it was the Castleisland side which held its opponents to a single basket which came from Rachel Creedon.

A series of fast breaks and some great passing saw St. Mary’s net 11 points for the quarter and go up by three points at the interval.

St. Mary’s continued to dominate throughout the third quarter and increased their lead to 14 point at the end of that period.

The final quarter saw Bobcats fight back and reduce the gap to single digits once again but St. Mary’s came back into it and took the win by 12 points.

U 14 Girls Division One Cup

Kenmare’s Grace Rob Whyte was first to find the target in the U-14 girls final but St. Mary’s Emma Kerin was quick to respond.

St. Mary’s had possession for much of the first quarter but found it difficult to convert.

However, as the quarter progressed they found their target and scores were added by Joanna Moynihan, Hannah Herlihy and Ciara Casey.

Kenmare responded through Amy Harrington and Clionadh Daly but it was the Castleisland side who led 11 points to seven at the end of the first.

St. Mary’s had a strong second quarter also increasing their lead to six points just two minutes in. Shauna Tagney netted another assisted by Muireann Rahilly before Tanya Salvado came into her own for Kestrels and netted Kenmare’s first score of the quarter.

St. Mary’s went on to take the quarter by six points and held a 10 point lead at the interval.

St. Mary’s opened well making some great forward passing but they found it difficult to score and Tanya Salvado won everything under the boards and Amy Harrington was at the ready for the fast break every time. Harrington and Salvado were Kenmare’s sole scorers for the quarter netting 17 points between them as they and their team mates held Castleisland to four points.

Kenmare led by three points going into the final quarter and again both Salvado and Harrington took control giving a fantastic display to give Kenamare a well earned win on the day.

The division two ladies final was contested between St. Mary’s and Kenmare Kestrels.

The Castleisland side got off to a flying start defending well and converting easily. Aisling O”Leary, Aileen Ahern, Doreen Bradley and Roisin Casey all making the target from inside while team captain, Louise Joyce popped in big ones from outside.

Kenamare’s Annie Cooper opened for her side with a three but from here on much of their first quarter scoring was done from the free throw line. St. Mary’s led 22 points to 10 at the end of the first.

The second quarter saw a brilliant comeback from the Kenmare side. Caroline Taylor, Montse Salvado and Annie Cooper dominating the boards while Castleisland fought to maintain their lead. By half time the sides were level at 33 points apiece.

The third quarter was similar to the first with St. Mary’s once again taking charge and netting fifteen points to their opponent’s five.

The Castleisland girls were definitely the hungrier team on the night and went on to take the final quarter by seven points and run out deserving winners.

© Copyright Notice: All materials and artwork contained on this website are copyrighted by the creators under the protection of Irish and International Copyright Laws. Material may not be downloaded, copied or used without written permission.