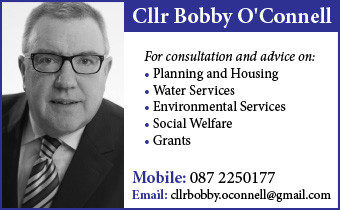 Councillor Bobby O’Connell announced with pleasure that the full ‘Christmas Bonus’ will be paid to social welfare recipients in Kerry on the week beginning December 7th.

“This year, due to the challenges of COVID-19, the Christmas bonus will also be paid to recipients of the Pandemic Unemployment Payment.

“This was confirmed to me by the Minister for Social Protection, Heather Humphreys, who has announced the details of the largest ever Christmas Bonus,” said Cllr. O’Connell.

“As always, people on long term social welfare benefits such as pensioners, people with disabilities, carers and lone parents will receive the 100% Christmas bonus.

“Those who have been in receipt of the Pandemic Unemployment Payment (PUP) continuously or otherwise – for at least four months – 17 weeks – since March will also receive the Christmas Bonus this year.

“Minister Humphreys has also taken care to ensure that anyone returning to work next week as restrictions ease, will not be excluded from the Christmas Bonus.

“Any person in receipt of PUP for any one day from Friday, November 27th to Thursday, December 3rd will still receive the Christmas Bonus provided they also meet the 17 week requirement.

“So, anyone returning to work this Monday or Tuesday will still receive the Christmas Bonus as they worked at least one day during the said period.

“The same criteria is also being applied to those on jobseeker’s payments, who in previous years would have only received the Bonus if they had been out of work for at least 15 months”, Bobby concluded.

“I would strongly encourage people to spend their Christmas Bonus locally this year and support our local shops and businesses in our towns and villages throughout the county.

“This will mean a €390 million injection into the Irish economy at a time when many small businesses will be reopening their doors as restrictions are eased,” said Cllr. O’Connell.