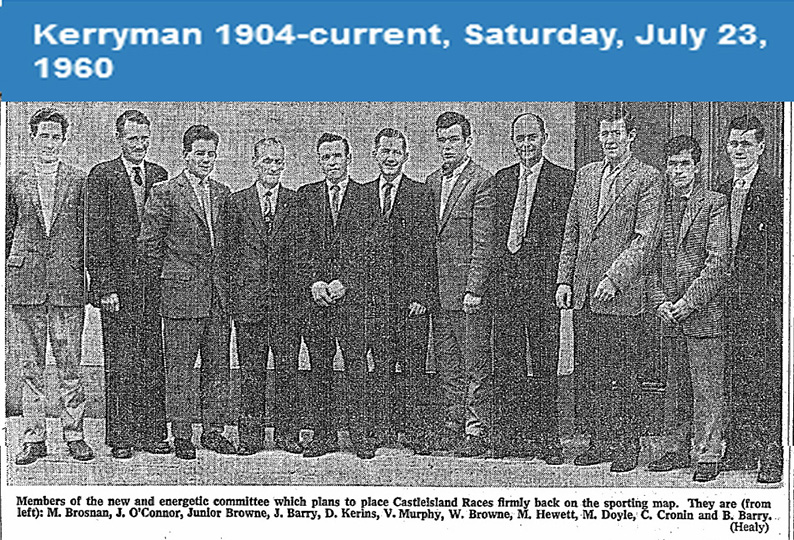 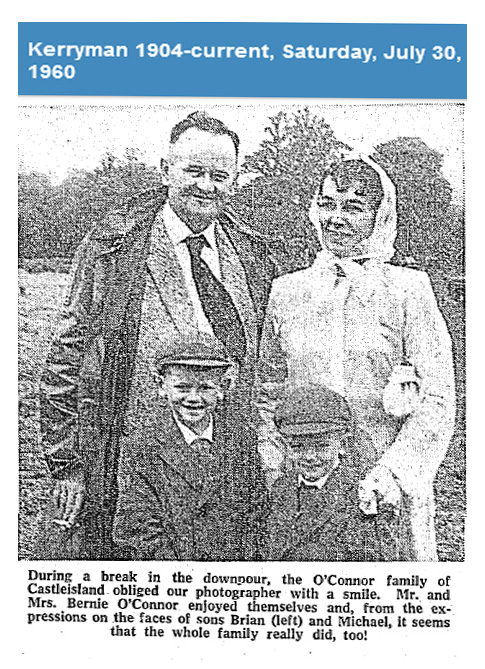 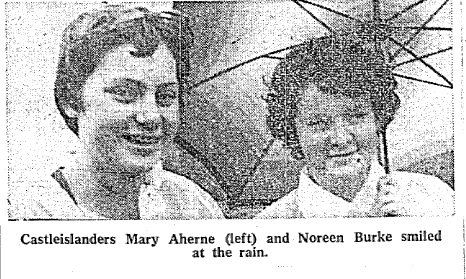 The revived Castleisland Races on Wednesday triumphed over weather conditions that were, to say the least, discouraging.

But the energetic members of the new committee resolutely refused to be discouraged, in spite of the rain, a lack of co-operation on the part of some horse owners, and the almost liquid conditions underfoot.

In the words of Cork City sideshowman Donal Hogan – who has been putting up his stalls at Castleisland Races for over ten years – “The committee went all out to make the meeting a success.”

Michael, no newcomer to the sport of kings, drove like a veteran with boot and leather, just beating into second place C. McMahon’s Clementine, followed by Miss P. Hand’s Falcon.

Wandering around the course protected from the downpour by a gaily coloured umbrella, I met famous Irish singer Josef Locke and his friends, John Scanlon and Don Gibson, both from Glasgow. Joe, I learned, is staying in Ballybunion.

“I intended to come with a party of sixteen,” he told me. “But the weather put paid to that idea.

“However, I am certainly enjoying myself and so are my friends.”

Incidentally, I learned that Joe has a couple of horses jumping at the Horse Show in Ballsbridge next week.

Also wandering around – but never far from their car – were Mr. and Mrs. J.W. Marshall and their family, from London,

They are staying in Castlegregory just now. Their seven-year-old daughter, Julia, was quick to tell me: “I had two winners already.”

Since only two races had taken place at this stage, I decided to keep an eye on what nag was this young lady’s next fancy!

A Most Enjoyable Meeting

Keeping a friendly eye on the and the hundreds who braved the weather was Mr. Bernie O’Connor, Castleisland, his wife and sons, Brian six and a half and Michael four and a half.

Jimmy told me: “It’s a most enjoyable meeting despite the bad weather. I had three winners …. it seems to me that Castleisland Races is now definitely established as an annual event.

Popular cocktail barman Noel Tabb of the Great Southern Hotel, Killarney, told me that he has invented a new cocktail called the ‘Kingdom Cocktail’ and hopes to win the All-Ireland cocktail competition and the Shelbourne Hotel, Dublin, later this year.

Said Noel: “Kerry seems a sure-fire choice for the All-Ireland football final this year, and I’m hoping that I can make it a double by winning the All-Ireland cocktail competition with a special Kerry cocktail.”

Dressed for the Weather

Busy keeping an experienced eye on things was Paddy Hussey, Castleisland, who is no stranger to race-meetings.

The Valley of Knockanure by Batt Coffey

Caherciveen ballad singer, Batt Coffey, who has been attending Castleisland Races for over thirty years, was more than willing to oblige when compere Richie O’Sullivan (Tralee) called him to the microphone to sing ‘The Valley of Knockanure.’

Near sideshowman Donal Hogan’s firing range I found a demure eight-year-old, Mary Sullivan of Black Road, Castleisland, almost hidden under an enormous umbrella, twice as big as herself.

Ruined by the Rain

Mary’s main interest in the proceedings seemed to centre around the bottle of orange juice she was drinking.

A jovial-looking Bernie O’Connor, smiling at the weather, told me: Castleisland Races this year would have been better than ever if it hadn’t been for the downpour. It’s a pity the efforts of the hard -working committee were, even to some extent, ruined by the rain.”

This opinion was echoed by Corkonian Donal Hogan: “The meeting would have been the best ever but for the weather. The new committee went ‘all out’ to make it a great success, and nobody can blame them if the only thing they couldn’t control – the weather – got the upper hand.”

Despite the rain, however, the full card was completed, a tribute in itself to the stewards, the organisers and the horse owners.

Wednesday night saw an estimated 800 dancers at the Astor Ballroom where to the lively music of Frank Hartnett and his Orchestra – not forgetting the musical clink of cash at the box-office –  a great night was had by all. The success of the dance ensures a strong financial backbone for next year’s Castleisland Races.

At the dance it was impossible, wherever I went, not to meet some member of the committee.

All Hands on Deck at The Astor

It was a gala occasion, one on which Castleisland went gay. Contributing in no small measure to the success of the evening was the spirited combination of Frank Hartnett, particularly clarinetist, Eddie Goodwin of Tralee and vocalist Paddy O’Connor.

Towards the end of the evening Secretary Vincent Murphy thanked all who had supported the races and the dance.

He paid a special tribute to Mrs. Coffey who gave the use of the hall to the race committee.