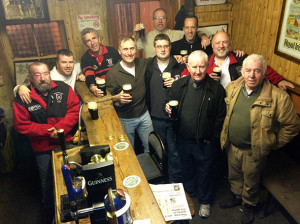 About this time last year a largely unexpected group of Munster Rugby mad Americans arrived in the door to Sheila Prendiville’s Bar and Grocery. We hardly knew it then but it gave us a glimpse of what the gathering would be like and, ultimately, achieve.

Those of us there on the night, with the gift of hindsight and a recovering brain-cell count, called  it A Gathering Launch – sometime after the event. There are certain things one can’t rush into – or out of.

It took place, quite informally and without fuss, at the ancient seat of conversation, fun and learning at No.22 Main Street. The house can rightfully boast the best Guinness you’ll find anywhere and the pints weren’t gone down an inch and the introductions done when the mixing began.

The visitors revelled in the company and more than held their own in the long night of singing and general devilment which followed. They even got to fill their own pints under instruction of host, Paul Reese and impromptu head barman, David ‘Dauber’ Prendiville.

The group, from the New Jersey based Morris Rugby Corporation gave a rousing and heartfelt rendition of ‘God Bless America’ and got chapter and verse and every syllable of ‘Skibereen’ in return from ‘ The Dauber.’

This was followed up by David O’Connor with ‘The Old Dromolton Road’ and a good night was well under way.

Before they left they hoisted their colours and a memento of their visit in the bar by pinning a club crest to a high shelf behind the counter.

The local connection is that they were led in by their adopted Castleisland man, Seamus Brosnan and his dad, Denis and they had to visit the oldest pub in the valley.

The rugby mad travelling party went to Galway to watch Connaught and to Thomond Park to see their special heroes,  Munster in the course of the weekend.

The Morris Rugby Football Club was founded in September 1977. Many of the early members were solicited from the local colleges as well as many local Morris corporations. Joining the Metropolitan New York Rugby Football Union in 1978, Morris has grown to a size of 50+ players, an Old Boys team and a women’s team. More recently, the men’s club membership has included people from many different areas of the world including England, Wales, Scotland, Ireland, France, Australia, New Zealand, South Africa and Canada. In 1982 Morris RFC founded and continues to host the Annual State Championship, Jersey Cup. They also participate in many other tournaments each year such as that run by the Washington Irish St. Patrick’s Day Committee.

The punch-line is that they’re coming back soon for more of the same and another great night at No.22 is assured.