The Sinn Féin Bonn/Doherty Cumann, Castleisland is holding a wreath laying ceremony at the War of Independence memorial at Castle View on this Friday evening, May 1st. The march will leave the new library car park at 7pm and proceed up Main Street to Castleview where two wreaths will be laid and an oration given by Councillor Pa Daly.
The event will mark a bloody confrontation between Irish Volunteers and British occupying forces on Sunday, July 10-1921.

Three of the volunteers, Jack Prendiville, Richard Shanahan and Jack Flynn were killed on that night near the spot where the monument stands today. Six British soldiers also lost their lives in that battle.
The event was chronicled in a blow-by-blow account by the British Bureau of Military History and compiled in 1955.
Denis ‘Den’ Prendiville from Breahig and who lived at Upper Main Street where Martin Curtin’s Shop is now, played a very active role in the War 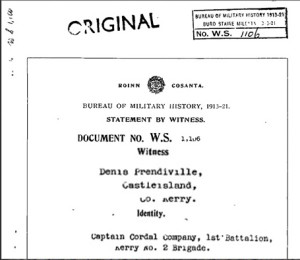 He was captain of the Cordal Company, 1st Battalion, Kerry No. 2 Brigade from 1914 to 1921. It is his first-hand, eye witness account of the battle that night which is included in the BMH 1913 – 21 report. He lost his brother, Jack Prendiville that night and it was during this turbulent period that the library was burned down by the volunteers as it was being earmarked by the British as a potential headquarters.

You can read Den Prendiville’s account of his activities during the War of Independence by clicking on the link here. www.bureauofmilitaryhistory.ie/reels/bmh/BMH.WS1106.pdf