The winner of Kerry GAA Car Raffle for an Opel Insignia is Avril Duggan of Gneeveguilla,  Co Kerry.
The draw, in association with Ahern’s of Castleisland, was made at Kerry GAA headquarters before Christmas. However, a delighted Mrs.Duggan only took possession of her fantastic prize just before noon on Tuesday, January 7th.

Accompanied to the Tralee Road base, which Ahern’s Opel and BMW dealership has occupied since 2006 after its move from Limerick Road, Mrs. Duggan was greeted by Kerry County GAA Board chairman, Patrick O’Sullivan with: secretary, Peter Twiss; treasurer, Dermot Lynch and hosts, Paul and Pat Ahern and Patrick Burke. 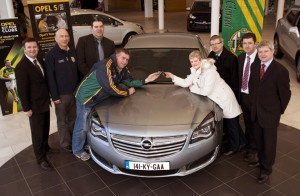