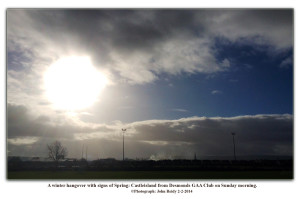 There were signs of Spring this morning as the sun made a welcome if rare appearance. Though there were banks of heavy, black cloud all around the horizon, there were patches of blue sky as well. However, it appears that too will be short lived as the forecast is for anything but hope and blue skies. Today’s forecast from Met Éireann for the Munster area is as follows:
Munster
02 February 2014- updated at 06:00
Today
Bright or sunny spells this morning, but scattered showers also. Cloud will increase gradually during

the day and a little patchy rain or drizzle will develop, especially in coastal areas. Highest temperatures 8 or 9 Celsius, in a moderate to fresh southwesterly breeze.
Tonight
Tonight will be very windy and mostly cloudy, with patches of rain and drizzle, becoming widespread later in the night, with some heavier bursts and a risk of flooding. Winds will strengthen further, with a risk of risk of strong to gale force south to southeast winds and severe gusts, especially in the south and southwest, where there is also a risk of coastal flooding. Minimum temperatures 3 or 6 Celsius.
Tomorrow
Tomorrow, Monday, will be wet and very windy in the early morning, with widespread rain at first. Brighter weather, with

sunny spells and scattered showers, will extend from the Atlantic during the morning. Winds will veer southwest to west in direction, remaining very strong for a time, but easing gradually during the day. Maximum temperatures 8 or 9 Celsius.