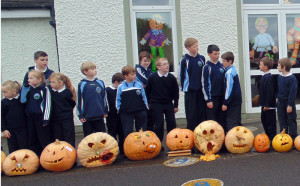 The children of Knockaderry National School in Farranfore posed proudly with the pumpkins which they grew, harvested and carved in their school with the enormous help of two local gardeners, Tim and Mike O’Leary.  Each child designed their own pumpkin and, with the help of parents, carved them during the week at the school. All children went home for the Halloween holidays with a Terrifying Pumpkin to cause a scare in their neighbourhood.

An old Irish legend tells of a character called Stingy Jack who invited the devil to drink with him.

When they met Jack didn’t want to pay for the drink so he challenged the devil to turn himself into a coin with which he promised to pay. The devil did his bidding but Jack put the coin in his pocket with a cross, so that Old Nick couldn’t 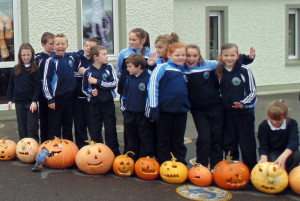 After a few other tricks by Jack he allowed the devil to go free on the understanding that he wouldn’t take his soul when he died.

Jack the trickster eventually passed away and couldn’t gain admission to heaven and was banished to hell. However, the devil had enough of him too and sent him off on a never-ending journey through a darkness the wicked deeds of his life-time had created for him.

The devil’s one concession to him was a lump of burning coal which Jack placed in a hollowed out turnip.

When he passes close to Ireland he takes the turnips and when in America he pounces on the pumpkins. And he’s still on his journey. You’d catch the odd glimpse of him on clear, frosty nights. Some people think he’s a shooting star. But that’s old Stingy Jack still throwing shapes.

You’ll find an odd one of his descendants carrying on the same old capers to this very day where ever drink is sold.