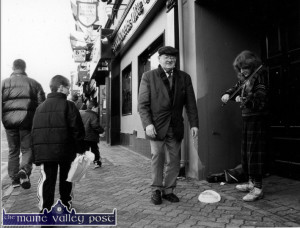 He’s the Man! – But Who’s the Man? And does anyone know who the fiddler player is?

This photograph was taken at the door of ‘The Danny Mann Nightclub’ on Killarney’s New Street a few days before Christmas in 1997.

Taken for no other reason than that it presented itself before me and, as you do, I did. It’s in its folder labelled: ‘Fiddler at Danny Mann Door Christmas 1997’ ever since.

The lady would divulge no more than the fact that she was an “Out-of-Towner” and the man, who made a contribution to the meagre furnishings on her collection plate, also danced a few steps for or to her amusement before he skipped off down the street and out of sight. So, over to you Killarney Today readers. ©Photograph: John Reidy 21-12-1997